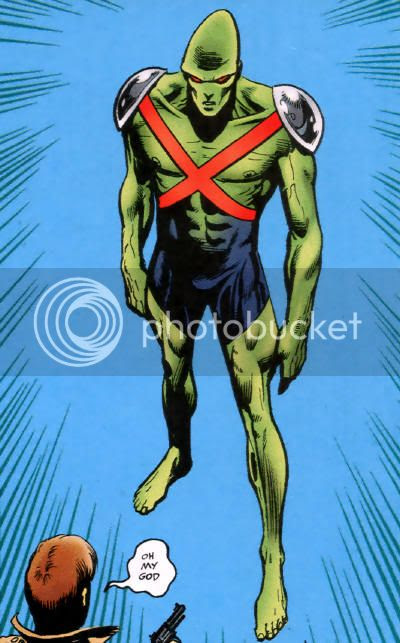 Allen Industries, Central City. Unable to move, Barry Allen struggled with his self worth.

Above the three story house they shared, Ralph and Sue Dibny slept. The first floor was devoted to the husband's Confidential Investigation Service (Divorce, Missing Persons, Criminal Cases, Court Record Access.) Lord knows how that won the heart of a debutante. Ralph received a late night call from a source about the James Jesse heist. In the mirror, Ralph spotted a figure hovering at his window, and lunged for the revolver in his bedside table. No one was there when he turned.

John F. Kennedy had managed to get elected ten times thanks to the peace and prosperity that came with the collapse of the U.S.S.R. in 1968 and the routing of other detrimental forces by Barry Allen and Van Savage since. Even through scandals and excesses, the people had stood by Kennedy, but the theft of the artifact endangered that trust. Jack hoped they could fix everything once again.

Wally West died, and was buried. Barry didn't believe he had gone to a better place. "Heaven's a dream, Iris. You know the score. Particles and chaos. Entropy and inertia. The universe doesn't give a damn. Iris had been a rock for Barry all those years, but Allen needed solitude to go over all the information gathered during West's final days. Barry teleported aboard the deep space probe Odyssesus for that time.

Ralph Dibny beat the stuffing out of tailor Paul Gambi for information. Gambi was known for making super-villain costumes and other arrangements, including a passport to help James Jesse get out of the country. A tape measure helped Ralph choke the last details out of Gambi, including a package with the jumpsuit Jesse had worn while performing his heist. "Hmm. If I were you, Gambi, I'd pack a quick bag and beat it. Don't even bother folding the shirts."

In a back alley, Dibny again ran into his mysterious client in the trench coat and fedora. Ralph drew on him, but the figure knew he wouldn't fire. "I want more information. I want to know what was recovered from Mars... Perhaps if I reveal something to you, you will reveal something to me. The coat came off, and an Elseworlds version of the Martian Manhunter stood revealed. 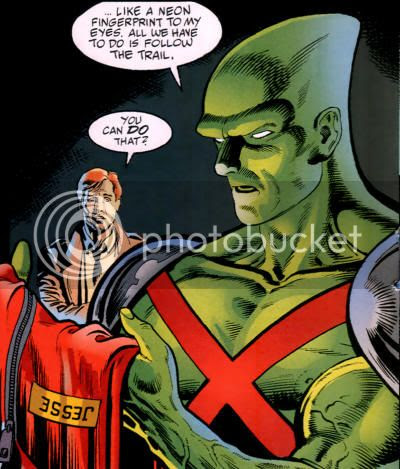 On the probe, Barry Allen dreamed of a life as the Flash not his own. Villains unmet in this reality, friends from the Justice League of America familiar only to the reader. "A league of incredibly powered heroes... all of them decked out in gaudy costumes... all of them... except the big green Martian who wears practically nothing. The dream is false and yet feels so real..."

In the alley, a touch over the face left Ralph Didny heaving from the psychic information dump of an alien life. "You've convinced me... you're a Martian... you're real... it's... so horrible." As he looked over Jesse's uniform, the Martian explained, "'Horrible' doesn't begin to describe it. We have to find the rod." The suit was thought useless, "to an Earth Manhunter. But for me... there are skin cells sloughed off in this material. They still produce a vibration, a frequency... like a neon fingerprint to my eyes. All we have to do is follow the trail." It ended in the harbor, where the Martian retrieved James Jesse's body from underwater. "Death is not necessarily an absolute. His mind may still contain retrievable information. Perhaps I will find something. Perhaps nothing."

At Immortality Incorporated's restricted R&D lab, Len Snart showed off his Wally West clones. Most vibrated uncontrollably, and died trying to pass through the atoms of six feet of solid steel. One was different-- smarter-- somewhat in control of itself. It insisted it was the Flash. Van Savage wanted that one destroyed. While Savage was grateful Snart's cloning process had allowed him to continue surviving without the need to harvest organs from his descendants, he could not risk a super-speed clone of West getting loose. Besides, Savage was far more interested in the source of the speed powers than the individuals possessing them.

The Wally West clone made it through the steel and out the door. It battled police. It stole a Flash costume from the museum. At Allen Industries, it confronted Iris and the returned Barry Allen before running away screaming "No!" Ralph Dibny approached through the rubble left in the Flash's wake, and Iris revealed it was she who had been working with this private eye. Barry didn't know this guy from Adam, but was interested to learn James Jesse was dead, and that it was Vandal Savage who had hired and murdered the rogue. Allen wanted to know how Dibny knew all this. "A big green Martian told me," he answered with a smirk to Allen's shock.

The second of three Flashpoint chapters was by Pat McGreal and Norm Breyfogle. Ralph is a lot more fun as a dick, and the Manhunter redesign wasn't half bad.

Posted by Diabolu Frank at 8:19 AM

I really like the redesign here because it takes the shapeshifter aspect and applies it logically. Clothes are not a big deal to J'onn especially when he's not regularly hanging out with earthlings in his Martian form he wouldn't feel the need to change much.

Also, I love Breyfogle's take on his demeanor. Lean but powerful,and that second panel screams detective.

Agreed. Breyfogle has a really nice handle on the character, and I like the design within the context of an Elseworld.

Hmm...I'm more and more intrigued by the original Flashpoint. I didn't know J'onn had a significant role in it.

I like painted-on clothes concept becuase it makes sense for a shapeshifter, I'm jost not a big fan of shoulder pads (metal or otherwise), but this is an Elseworlds, so I'll give it some slack. I like seeing a leaner J'onn here and there, too.

I'm going to have to go on an Elseworlds kick now. For whatever reason, I want to re-read that one set during WWII that I can't think of the name of...

The JSA one Jolley and Harris did? The Unholy Three?

No, I don't think that's it. It was the one with Hitler and his secret super weapon soldier who we're all supposed to think is Superman but it actually winds up being J'onn at the end. I can't even remember the title.

Just Googled it, and YES, that's it! It was driving me crazy. I totally don't remember the Joker or Batman being in it, which is what was throwing me off.