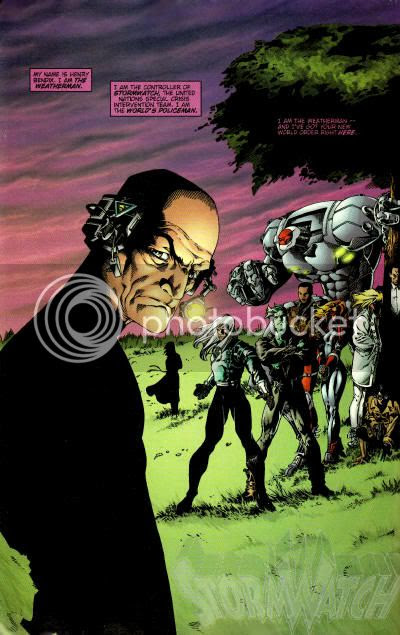 Following the funeral of the traitor Flashpoint, for whom seemingly no tears were shed, the Stormwatch team returned to their satellite headquarters, SkyWatch. Each member was presented with a "fetish," a stylized necklace that served as a communication device, teleportation beacon, and all-points alarm signal.

Stormwatch appeared to be under new management. The United Nations Special Security Council was replaced by anonymous men fond of smoking, guns, and being menacing from a shadowy judicial bench. The council gave their Weatherman leave to do his own thing, and would offer no further communication unless he made a mistake. This suited designs Henry Bendix already had begun to effect.

In London, Weatherman One found an old acquaintance in a bar for superhuman/natural elements. Tank Girl was among the more obvious patrons winking at the fourth wall, but Bendix was there to invite Jenny Sparks to take part in his new conception of Stormwatch. The long-lived Sparks had passed ten years earlier on the first Stormwatch, having been in a '60s super-group that took part in an alternate universe version of Altamont, and another poor turn in the '80s. Sparks had been drinking ever since, but part of her still wanted to change the world. Bendix agreed, wishing to stop putting band-aids over cancers, and his conviction won Sparks over. "The first time you lose your backbone over a problem, I'll kill you, Henry. I won't wear one of those damnfool spandex body-condom things. I don't have the bust for it."

Bendix continued to New York City for Jack Hawksmoor. A series of childhood alien abductions had seen Hawksmoor altered to become the perfect neohuman creature for urban environments. Having started out helping his city fend off the parasites of crime, Hawkmoor had worked his way up to politicians and corporations, the sort of targets Bendix now eyed. Bendix closed his tour in Sicily, collecting the silent assassin Rose Tattoo as his final addition.

Returning to SkyWatch, the cuts began. Union, a sort of Green Lantern by way of Thor, was ridiculed and barred from any further association with Stormwatch. Due to his relationship with Synapse, Battalion was removed from field duty to serve as a trainer, while his lover went into the field. Nautika and Sunburst were removed from active duty entirely as an "anniversary present," serving instead as analysts from their suburban home. The team would be broken up into three vaguely defined sections, with Winter commanding the superhuman specialists Fuji and Hellstrike as Stormwatch Prime. Stormwatch Red, the overpowered "nukes" of the team, would be led by Fahrenheit with Flint and Rose Tattoo. Jenny Sparks would be the unwilling head of Stormwatch Black covert insertions with Swift and Jack Hawksmoor. All other team members were due a severance package.

Synapse explained to Swift that her powers were not fully activated, and with the Tibetan's permission, completed her mutation to mysterious result. Former team member Undertow was killed in an explosion when his apartment was booby-trapped by persons unknown. Immediately rendering the team separation moot, all active members not in Stormwatch Black were sent to Germany to kill a mass murdering super powered being (SPB) called "Father" who enjoyed misquoting Nietzsche. Bendix thawed Father's creator out of SkyWatch's cryogenic prison for information, then appeared to shoot the man before returning him to suspended animation.

"New World Order" was by Warren Ellis, Tom Raney & Randy Elliott. Alan Moore was leaving WildC.A.T.s around this time, taking a good deal of Wildstorm's cache with him. In the absence of another acclaimed British writer to take over that book, I suppose someone decided to at least give an up and coming limey carte blanche with that book's ugly sister. After years of daring work on bottom rung Marvel titles, Ellis would finally begin building his name in the industry with this title. Similarly, Tom Raney had several short stints on various Marvel and DC team books without any real impact, but would make a cult hit out of this title. For myself, I thought it was okay when it first came out, and I knew which customers it would appeal to, but it wasn't something I felt any compulsion to follow regularly.
Posted by Diabolu Frank at 12:00 AM