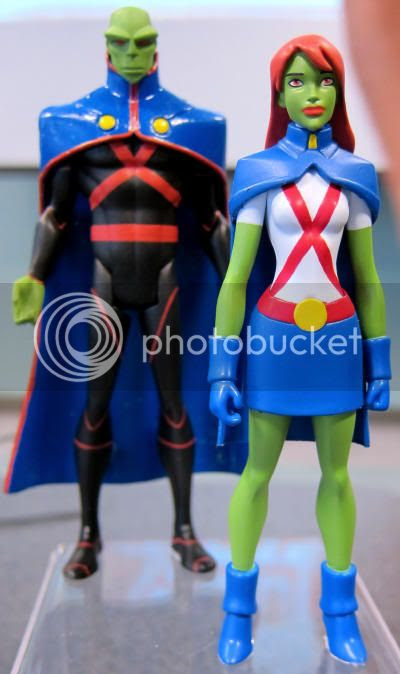 I have the best intentions when it comes to toy posts, but the truth is that they are an enormous pain that I routinely avoid. Shots of a figure in packaging, out of packaging, close-ups of body parts and accessories... all those reflective surfaces and angles... such a headache. Anyway, seeing as how it's unlikely I'll be buying any new figures soon, and I don't follow the Young Justice cartoon, maybe it's best I just direct some coverage to Action Figure Times.

It seems that beginning earlier this year, Mattel started putting out toys for the 'toon in two formats: six inch heavily articulated DC Universe Classics, and streamlined 4½" pieces more in line with the style of Justice League Unlimited. As far as I know, Miss Martian didn't make the cut for either line initially, marking her upcoming two-pack with uncle J'Onn J'Onzz the character's debut in action figure form (although I stand to be corrected as needed.) I'm not sure if this will be out in 2011, or where, but you can check out very high resolution pictures here
Posted by Diabolu Frank at 3:57 AM

Cool I was hoping for a 6 inch version but I can live with this. Nice to see they are including Jonn too. I liked the Young Justice redesign of Jonn the new outfit without the pickle head and skrull chin.

I'd like it a lot better without the whiplash collar, but it's not a bad design. Oddly passive posture, though.

they look just like they do in that awesome cartoon but i wish they were more articulate.

Looks like the DCnU might have a Miss Martian after all. After looking at the new Teen Titans book page 6 or 7 (I'm looking at the digital version) that looks like her on one of the screens.