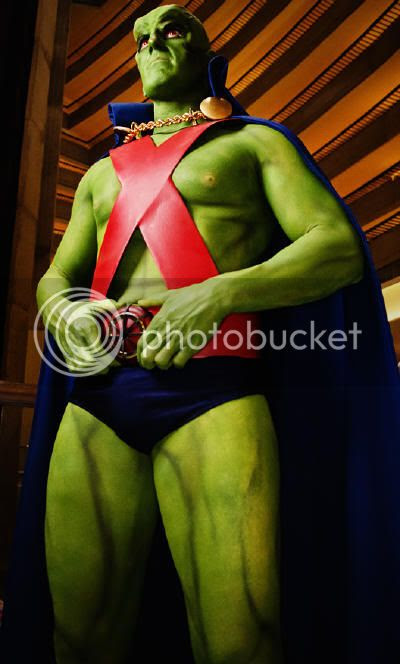 Last year, cosplayer "KalEl NC Sean" proved himself the greatest live action Martian Manhunter yet, established by photo sets here and here. The fellow returned to Dragon*Con to ably defend his crown, although I suppose he did such a fine job last year, nobody showed up to compete. It's not like the Manhunter from Mars received two distinct new costumes/looks in the last year alone or anything, right? Regardless, so long as this guy keeps hitting the gym and the body paint, he should remain the one to beat. 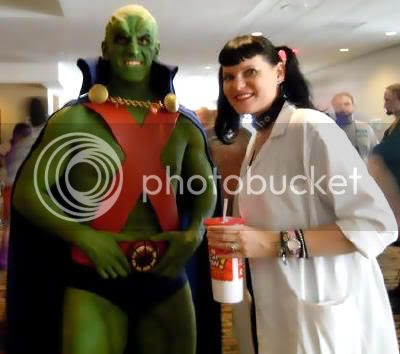 My father tapes broadcast television, and by that I mean he has multiple VCRs with which he tapes a sizable percentage of all primetime network broadcasting to watch during the day. Ah, to be retired without cable. Anyway, he suckered me into watching NCIS for the first time with the lure of a girl he said was just my type. My father is prone to broad overstatements, but every now and again, he nails it. Above is J'Onn J'Onzz with Abby Sciuto, the only fortysomething to ever pull off a goth pixie look, as portrayed by Beth Dolgner. 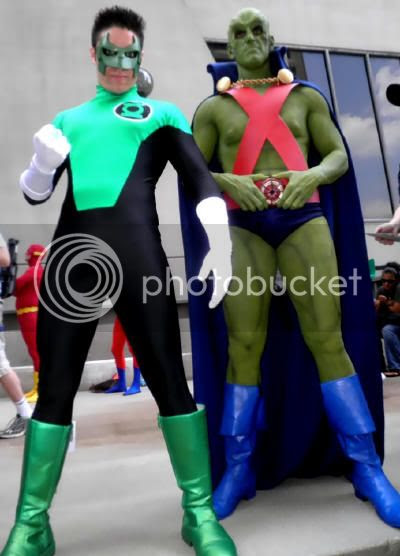 I resented the hell out of Kyle Rayner for replacing Hal Jordan after something like 35 years as Green Lantern. Yet another Caucasian christian male heterosexual, the only difference being Kyle was the younger, more "artistic" model? JLA taught me otherwise; that Kyle could be the wide-eyed newby, reflecting the reader's wonder at seeing the first all-star League in decades. Plus, I read more Hal comics, and that guy was such a creep. Anyway, Kyle's in an extant GL team book and hasn't served in a League since Infinite Crisis, so I find I miss both of these characters enough to not buy a second consecutive Justice League volume. On that note, let's close out with the "J'J'LA," my preferred Post-Crisis incarnations of the Flash, Wonder Woman, Superman, and Aquaman, plus Green Lantern Rayner and a perfect Plastic Man (nice touch with the elongated rabbit ears.) If you must have your Man of Steel front-loaded Satellite League (complete with the Usurper,) click here.

Actually, I missed a couple of studio shots with this cosplayer in 2010, so how about some links before bidding adieu?

Posted by Diabolu Frank at 5:40 AM

I enjoyed the photos, and this is an interesting portrayal of J'Onn. I also enjoyed the rabbit ears over Kal-El.

That's a really impressive J'onn cosplay. Great photos and great work by the "players" all around.

thank you for those cosplay links those are great! nothing however beats that Ms. Martian costume and make up job from that girl in Germany. by the way i got your most recent comment on the SS blog and i'd like to turn your attention to this guy's #1 relaunch video review. it might make you think twice bro or at the very least give you a few good laughs:
http://www.youtube.com/watch?v=j8nm8LK53zE

Frank - As always, fantastic write-up on the cosplaying! Sorry I couldn't get any good pictures of the Martian Manhunter cosplay, it just wasn't meant to be this year.

The Plastic Man is HILARIOUS! He really lives the role during the photoshoots.

Thanks for the links!

You ponied up plenty of great photos Shag, including the only Damage I've seen, so thank you kindly. That Plastic Man is one of my favorite cosplayers ever!

Looking at the picture of him with Kyle, then scrolling down to the picture of Telok'telar is rather amusing considering they are striking the same pose.

It must have been cold there, in J'Onn's shadow... Never to have sunlight, on his skull-tongs...

The guy doing Martian Manhunter in those pics is my friend, Sean. The Kyle Rayner next to him is my good buddy, Zack Santiago.

Thanks for the info! I added a credit for Rayner under his photo. Sean posts comments here occasionally, but since he does so anonymously, I'm not sure if he'd want to be identified in the main post...

No, feel free to use my FB name of "KalEl NC Sean". The only reason I post anonymously is that the choices it gives (Google Account, OpenID, or Name/URL) I don't have. :-)P I would sign in if I could use my facebook or twitter login. :) And again thanks for the spotlight. :D

Duly noted and corrected! I'll also see if there's any way to open up commenting through Facebook/Twitter...

Thanks. I'm honored to be featured. Love your blog.

You've earned the spotlight with your outstanding cosplay. I look forward to more in 2012!