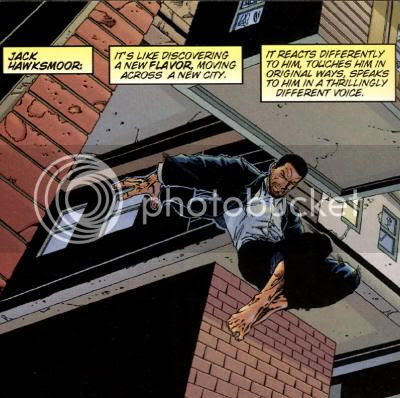 Monday. Jack Hawksmoor was aboard the SkyWatch satellite, and therefore treated by medics while being debriefed. The Lincoln City Police Force on the U.S. east coast had a recent history of human rights violations to rival New York's, a parallel mightily belabored. The exception was that Lincoln was employing superhumans to do their dirty work. Stormwatch Black would be sent to investigate, Jack slightly ahead of the rest, since he retched up black goo and needed to return to city life.

Wednesday. Jenny Sparks and Swift checked into a local hotel. Jack Hawksmoor made the trip via a spherical "Transit Womb" that allowed the living city of New York to contact Lincoln and transfer Jack within hours. That night, the trio went into action. Swift unveiled her full activation as a Seedling, large wings on her back and talons on her feet. A Tibetan expatriate, Shen Li-Min hoped to stop the oppression in Lincoln that she couldn't where she grew up. Jenny converted to pure electricity and traveled by television. Jack ran loose, savoring an unfamiliar new city he instantly fell in love with. Individually, they found and beat the bloody hell out of the super-cops before turning them over to Stormwatch. Weatherman's masters were aware of the media attention these SPB police were getting, and warned him a final time to leave America alone. Bendix imprisoned twenty Super Powered Beings cryogenically on SkyWatch without trial. He was also now aware that there was another activator besides his own Christine Trelane making these SPBs possible.

"Black" was by Warren Ellis, Pete Woods, Tom Raney & Randy Elliott. A major problem I have with these stories is that they aren't stories, just premises. This tale, for instance, was played up using a timeframe jumping scheme that attempted to mask the information dumping needed to convey the premise. Without the device, one would be more likely to notice that beyond the exposition, the heroes simply battered the one dimensional evil cops and jailed them, with no serious attempt at characterization or complication. The politics are hamfisted in the same way as a Judd Winick script, and most of the art is by a severely unripened Woods.
Posted by Diabolu Frank at 12:00 AM

The first Stormwatch lasted 50 issues, so 21 more of those to go. Then you have the 11-issue second series, then 30 issues or so of The Authority. What makes you think you can finish all of this before the new series is canceled (but not before a new writer comes in with a new line-up that doesn't include you-know-who)? It's not like you're enjoying this stuff, and would at least have the consolation of having read some good comics before they become irrelevant.

Exactly. They have little or no relevance to our hero, and... they're not even good.

Maybe it's time for a new poll, asking readers how much Stormblech belongs in a Martian Manhunter blog. I'm hoping you're just going to review the key issues introducing Ellis' concept of the team, and the first appearances of the current members.

Well, I've got the first trade's worth of synopses written, but I've thought about offering a Stormwatch poll, and these comments gird me toward that end.