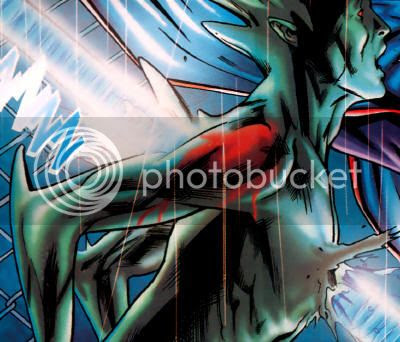 Roh'Kar was a White Martian made to believe that he was a Green Martian. He was presumably named after the Martian lawman Roh Kar, and that spelling of the name was used interchangeably with Roh'Kar.

Roh'Kar was the last of a group of brainwashed Whites captured by Cay'an and turned over to the U.S. government for unscrupulous research. As the newest and strongest of the group, it was decided that the five other prisoners would channel their available strength into Roh'Kar. This would provide him with power enough to escape from a top secret laboratory under New York City, killing a guard before vanishing into thin air.

For the previous month, Roh'Kar had managed to make vague, sporadic telepathic contact with J'Onn J'Onzz. Weak and disoriented, Roh'Kar finally made a firm psychic connection, calling on the Manhunter from Mars for help against the forces seeking to recapture him. Roh'Kar had an implanted device that signaled his location, and while the Martian Manhunter was distracted by a conversation with Roh'Kar's former captor, a bead was drawn on the fugitive. Making amends, the Manhunter dove in front of a psychic pulse blast, which pushed J'Onzz out of the building they were in to the street below. Roh'Kar continued to run, and locating his implant, tore it free from his right shoulder.

Reunited, the Manhunter promised to keep Roh'Kar safe, but a second pulse from a human sniper rifle tore through Roh'Kar's chest. The Martian burst into flames, never recalling his true nature. His dying words warned, "D--do not... trust... o-others... There... are... others... like... us..."