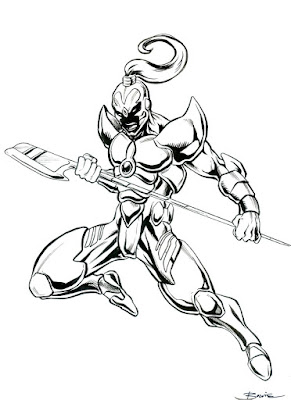 Welcome back to Best (Martian Manhunter) Art Ever (This Week)!

Before Comicpalooza 2012, I made a list of all the artists that I was interested in getting commissions from ranked in order. While loosely constructed, I weighed desirability against cost and availability to give some sense of structure and priority. For instance, I circled artist alley like a vulture waiting for Dave Johnson to appear, because I wanted the option of getting art from him before he could potentially get backed up by requests, and because his rates were high enough to heavily impact on how many other commissions I could get and by whom.

There was a whole section toward the bottom of my list for painters and digital artists. The problem there was that I expected such pieces would be very time consuming and expensive, not to mention the probability that a convention floor wouldn't be functional to work on. Both disciplines often mean the artists don't offer convention commissions at all, only prints. True enough, most of the guys in that section of the list proved prohibitive to my designs. Other guys were good on a computer, but not so hot by hand.

Several guys painted in oil, which takes forever to prepare and to dry. Others used swifter acrylics, but either way, those painters charged frankly outrageous fees. One had a book of pieces my girlfriend insisted on tossing through, much to the dismay of my nerves, as every page was in the 4-5 figure range. More galling to me, most of the artists selling those types of pieces photo referenced to the point of plagiarism, in my opinion. I understand the need for reference, but I feel an artist should take their own photos when possible, or transform the pictures taken by others. If I look at a painting and only see a reproduction of a photographers subject/lighting/details, I'm more disgusted than impressed.

I wasn't sure how Damon Bowie would work out. He had a few penciled pieces on Comic Art Fans, but my main source of his images was his digital heavy deviantART gallery. There are some really great looking pieces in there, of both established and new characters, but I wasn't even sure the guy did standard pen & ink commissions. Doing some more hunting closer to time, I found a commission price list with very reasonable rates, which bolstered my enthusiasm.

Upon getting to the con, I couldn't find Bowie in the common artist alley area. Instead, I stumbled upon him further back, mixed in with more specialized merchants (LARPing supplies, steampunk, jewelry, etc.) His booth was stocked up on prints for sure, but he was also taking requests. He wasn't doing any color, but he had a simple flat $20 rate for penciled & inked single figures. I was bowled over by that price, among the cheapest at the con, and for a full figure no less! I wasn't sure how the results would turn out at that rate, but I was happy to pass him an Andrew Jackson to take my chances. In return, he gave me a business card, and wrote on the back the character's name and the day drawn.

Folks who read Justice League Task Force should have no questions about why I selected Glenn Gammeron for a commission, and those who didn't ought to correct that mistake. As I explained to the artist, Glenn is an intergalactic bounty hunter who was acquainted with J'Onn J'Onzz before the plague death of Mars. The two bumped heads when Gammeron captured Despero to collect on a warrant, and Glenn the frienemy ended up hanging out for the rest of the series' run. Glenn's a funny and cool character of the sort many of us know, who spends half his time on the cell phone with his wife, explaining and arguing over his jobs. He's strong, can fly, and fires energy bolts from his staff. His instantaneously appearing armor is pretty consistent, but he can work with or without the helmet. As you can see, Bowie chose with.

Unlike my usual kvetching over the reproductions for this blog, Bowie's 9" x 12" sketch board fit on my scanner, and the inked black and white art came out as a JPEG practically identical to the original (disregarding stray layout pencils dispelled through contrast.) The artist proved an excellent choice for the character, as he deftly worked in all the details of Gammeron's ornamented armor, as well as capturing his dynamic combat style. I gave Bowie a variety of reference images, and I like how he synthesized the original Ramon Bernado design with the leaner body type of Denys Cowan's take on the character. Gammeron is one tough hombre, and I love how Bowie rendered him. To get this level of quality for such a low price, I'd have been a fool not to hit Bowie up each day of the weekend, and a fool I ain't (in this respect, anyway.)

For more by Damon Bowie, check out After the Dream, his web comic with writer Jeremy Begin, or his Christian art prints.

This is great art work, and Glenn Gammeron might fit in well with the New 52.