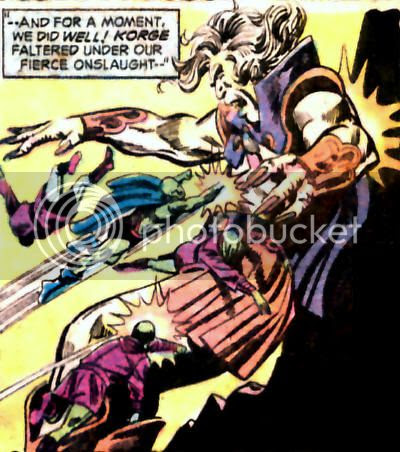 Despero was impressed/disturbed by the fight Doctor Arthur Light gave, as he initially looked like a pushover, but stayed right up in this thing down to the end. 40% of 27 respondents wanted the guy who gave Sue Dibny surprise sex and has fought the non-powered Green Arrow more than any other single super-hero who's any damned good at all. Close call or no, we're sending him out on a dinghy. More definite results are expected from Korge, the Last Angry God of whatever that planet was in the Bronze Age that the Martian survivors settled on. In a fairly typical Martian Manhunter story from that period, J'onn J'onzz had already been preemptively defeated by the villain and gone running to his superfriends so they could fix things for him. On the plus side, rather than making J'onzz look like a tool by defeating the bad guy easily (see Commander Blanx, Re's Eda, N'or Cott*, Bel Juz, Challenger**, the Marshal and the entire surviving Martian military,) Korge actually kicked each individual ass in a JLA team. Given that powerhouses like Lobo and Doomsday have recently been voted off the island, the Vile Menagerie could use a guy with notches in his gnarled fingernails for the Flash, Green Lantern and Superman. On the other hand, the Martian Manhunter was another notch, and though he delivered the final blow in defeat Korge, it was all according to the brilliant plan of the Atom. I run an Atom blog, and the Tiny Titan desperately needs villains, but I'm not about to give him Korge. Does the Alien Atlas deserve more consideration, or is this another reach based mostly on home turf advantage? * Whose name I've consistently added an r to for about four straight years. ** Taken out by one Green Arrow, and isn't that embarrassing?
Posted by Diabolu Frank at 12:00 AM

The Mars II setting and the MM finish clinch it for me.

Yeah, another reader wanted Korge in the VM bad enough that he offered to write his entry, which prodded me to complete one myself. So far, Korge looks like a lock, and he'll get his profile as soon as the fix is squarely in.

Let's keep Korge, as he is a force of rage -- a good counter to J'Onn.