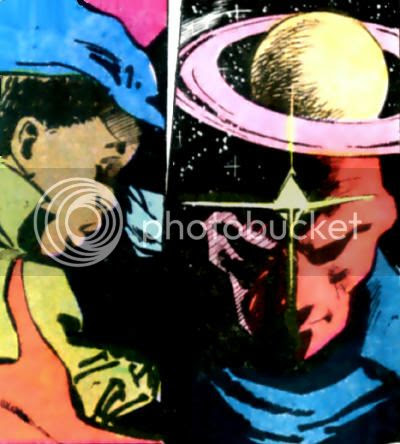 "A haunting memory is like a cold wind. It has no color, no taste, no form. Yet, as it blows across the mind helter-skelter, how bitter its touch!" --from the teachings of Rahani


Jemm sat and stared blankly into space as Kamah's body floated on in the sewer. Luther fretted over his alien friend, while Crazy Freddie offered the boy a drink of scotch. "It's better than talkin' to some geek-- especially one who don't seem to understand English, donchya know?" Luther lectured the derelict about friendship, while Freddie reckoned his only friend was in the bottle, "but it don't talk to me neither." Finally, the event the Son of Saturn had waited for and feared-- light and energy radiating from Kamah until her form vanished. The White Saturnian Koolar had been retrieved by others, even though Jemm had previously thought them all rendered extinct in his lifetime. "...He does not know... whether to laugh or cry... For if those who just used a Saturnian Collector-Beam... are also Whites... Jemm knows that they will try to kill him... and everyone whom Jemm holds dear! 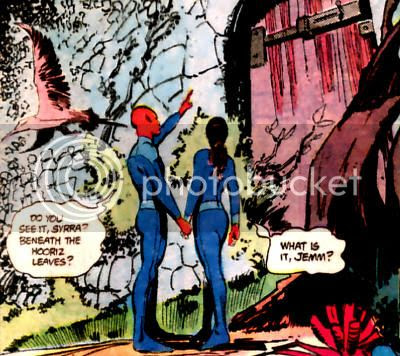 Jemm remembered a childhood incident with his best girl friend Syrra, where his youthful sense of adventure led him to an isolated door along his castle's edge. Jemm was intent on opening it, while Syrra warned "That cannot be, my Prince! The kingdom wall marks the end of the world! Nothing exists beyond it!" Though forbidden by his father to use his inborn power of flight, Jemm levitated to the door's heavy metal latch and unsealed it. Immediately, a White male warrior with a mohawk brandishing a battle ax appeared. "Pup! I'll cleave your scarlet head like a melon!" The door was the first breach in the kingdom the Koolar had found, and he was intent on killing the children to preserve his find. However, the king of Saturn, Jaxx, was aware enough to make short work of the Koolar. "Snake! Do you now take your ungodly war to the children?" Jemm was in for a rude awakening, shaking his naïveté regarding his security, his father's mortality, and the lives the king would have to take to protect them all. So repulsed was Jemm by the blood on Jaxx's hands from stabbing the Koolar to death, he ran from the king to consult his ghani-- holy man-- Rahani. 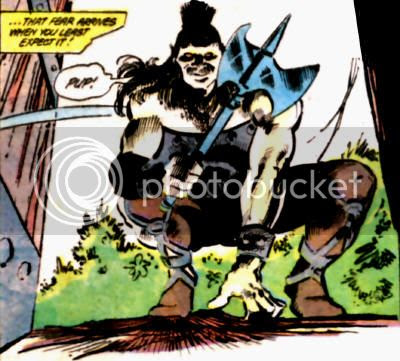 The priest told the boy about the history of Saturn (which was remarkably similar to that of Mars' Bronze Age,) and its warring races' unwillingness to share the Garden of Bhok. Next, he spoke of Jargon the Mighty, a warrior king who brought peace to the races in part through the power of an organic gem on his forehead. This lasted until the reign of Jaxx, as scientific achievements liberated the people from monarchic rule, allowing them to act on still seething racial animosity. From the Whites arose a great leader, General Synnar, and his match among the Reds proved to be Jogarr. Meanwhile, Jaxx's wife Jarlla gave birth to Jemm, who also bore a birthstone. "When the people of the kingdom saw the babe, they were amazed and cried aloud, calling the newborn 'savior' and 'peacemaker'! Surely, they thought, this child was a sign from the All-Maker of the Universe that peace would again come to Saturn." 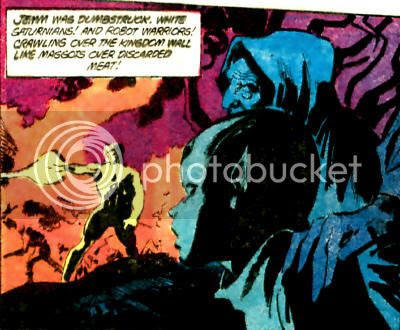 Jemm thought back to the night three months after, when his mother and Rahani woke him to travel down a secret passageway that led outside the kingdom wall. From that perspective, Jemm could see the White Saturnians and their robot warriors laying siege upon the city. "Countless days and nights they ran. Hunger knotted their stomachs. Thirst swelled their tongues. Finally, they spotted a cave. Rahani made a home for them there." Three days in, Jemm learned from Rahani that General Synnar had defeated Jogarr's forces, and sought the crown by attacking the Garden of Bhok. "In the cave, days turned to years." Jemm learned his powers of flight were exclusive to direct descendants of Jargon, and that his birthstone fired a beam that "could probe a man's emotions and lay them bare before the young prince." Jemm longed for his father and "his most cherished childhood friend-- Syrra!" 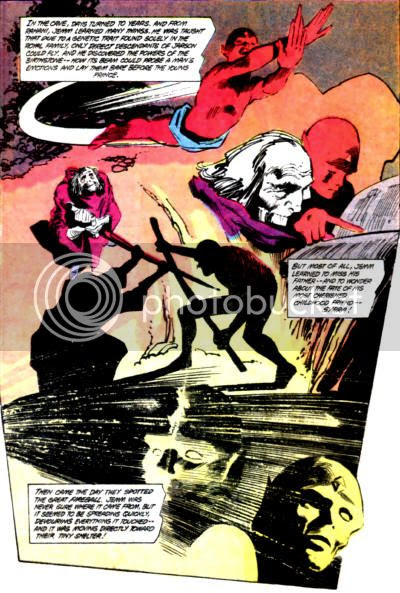 One day, a great fireball progressively devoured all of Saturn, and soon approached the shelter of the exiled royals. Rahani taught Jemm the final secret of his birthstone; how the Prince could summon all of his strength to perform one titanic feat before leaving his body racked with pain and sickness. Jemm was able to protect himself, his teacher and his mother from the destructive force that threatened them, and then they decided to trek back to Bhok to see what the fireball had wrought. The garden and all other life as far as the eye could see had been extinguished.

In the ruins, Rahani discovered the written account of a survivor of General Synnar's initial conquest of Bhok. The author was Syrra, who confirmed the murder of King Jaxx, but also her escape from the fireball via a rocket ship to Earth. Unfortunately, a Saturnian robot warrior yet stalked the remains of Bhok, and blasted Rahani and Jarlla dead before Jemm could bash its mechanized head to bits. "I will not run. Not like the night we fled from my father's side! I WILL NEVER RUN AGAIN!" Having located a spaceship of his own, the lonely Jemm set out for Earth, and "the one he had always loved..." 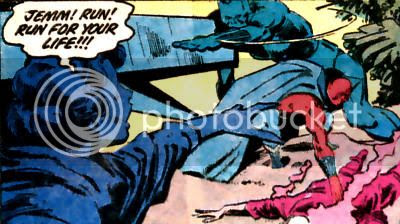 Returning to present day New York, Charles Brigham Dade again met with the Senator and Claudius Tull, who had brought in a very special expert to assist in their ongoing investigation of the criminal Saturnians. Like a Big Blue Boyscout, he was always ready when the United States needed him, but he had doubts Saturn was a legitimate problem. It was after all a dead planet, its entire surface devastated many years earlier. Superman had even been there to confirm it...

"Flashback (The Origin of Jemm)" was by Greg Potter, Gene Colan and Klaus Janson. This was the final issue initially written as "Jemm, Son of Mars" before conflicts behind the scenes forced it to turn sights toward Mars. Jogarr was clearly J'onn J'onzz, General Synnar was Commander Blanx, the fireball originally The Blue Flame of Mars and the holocaust the same as described in "...And So My World Ends!" Familiar terms like "Desert Dweller" were tossed around in this script but in none subsequent. The basics as established here could have worked with "War of the Worlds: 1984," but presumably the heft of politics and Jogarr's extensive role in the later story precluded that.
Posted by Diabolu Frank at 12:00 AM

Confession time ... I have never read this series.

Next confession ... I have always wanted to, especially now that my appreciate Colan's art.

So these reviews have been a godsend.

Was this ever collected in a trade?

Godsend? More like Sisyphean. I've tried to get these beast done for something like four years, and always end up faltering. Fingers crossed for 2012!

As with the best modern Martian Manhunter stories, the only way to get Jemm in trade paperback is by reading Spanish. I'll be covering the spiffy European collection soon.

I like J'emm and I hope that he does appear in the new continuity. Then again, I also hope that whoever works on the Martian Manhunter will somehow find this blog and spend hours reading it. (I can dream, can't I?)

You and me both, brother.

I was going to make a joke about Jemm appearing in National Comics as the lead singer in an all girl rock band with holographic powers, but "Son of Saturn" is such a firmly painted visual concept that a New 52 version shouldn't be quite that radical.