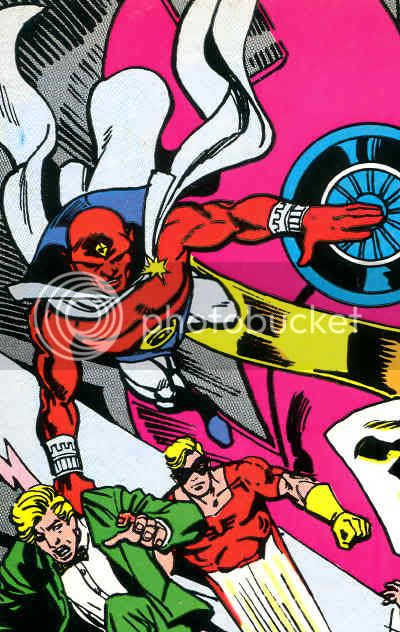 The Alien Arsenal was a museum of ancient weapons from the planet Vonn that accidentally and repeatedly teleported to Earth. It was seemingly wrecked in a battle involving Superman and a Thythen.

Charles Brigham Dade was a C.I.A. operative whose grief over the death of his fiancée led him on an anti-alien mission involving Jemm and Superman. He was killed by Saturnian robots.

Deidre Johnson was a NASA scientist and the fiancée of Charles Brigham Dade killed while investigating a Saturnian spaceship.

General Synnar was the father of Synn, and led the White Saturnian forces in a bid for conquest of H'ronmeerca'andra that unintentionally wiped out most of its population. He went mad and was killed by Jogarr.

H'ronmeerca'andra is the Martian name for the planet Saturn. It is inhabited by the descendants of Martian clones. The red-skinned Saturnians were engineered by Green Martians, while the white-skinned ones were created as slave labor for White Martians.

Hunter Commander J'en was a lover of J'onn J'onzz on Mars II before their estrangement and her joining the militant group the Soldiers of the Red Brotherhood. J'en assisted J'onzz in halting an invasion of Earth by Martian forces.

King Jaxx was the father of Jemm and the former ruler of H'ronmeerca'andra, better known as Saturn. He was believed killed by General Synnar.

Kishana Lewis is a California Forest Service fire fighter who as the descendent of Abel Carmody inherited super-powers to defend the Earth against the Demons of Black Spirit Lake. She was briefly the lover and ally of J'Onn J'Onzz.

The Krypt-Kicker was a rifle developed by the C.I.A. to be capable of bringing down Superman.

Queen Jarlla was the wife of King Jaxx and the mother of Jemm, Son of Saturn. She was killed by a White Saturnian robot.

Roh Kar is a Martian fascinated with Earth culture, especially law enforcement. The self-proclaimed "First Lawman of Mars" pursued the criminal Quork from Mars to Earth, teaming up with Batman and Robin to effect a capture. Roh Kar predated and influenced the creation of the Martian Manhunter character.
Posted by Diabolu Frank at 1:53 AM

This is good list and I love the art work. I am not sure how some of these concepts might be integrated into the New 52.

Given the "what? why?" of the recently announced Black (Lightning) & Blue (Devil) team-up serial, a Jemm revival could happen any time, and there are some fun toys to play with there.

Hmm, may Green and Red? A team up might be good as kind of a lead into a solo book, as J'emm has to go home sometime.

ya know i saw JEMM #1 in a dollar box last week and like a dumb ass i didn't pick it up. it wasn't in great condition but still.

I'm not sure it's in your wheelhouse. It's an extremely gloomy, self-important series. It's all about how racism is bad mm-kay, and how hard life is for black folks as imagined by a white liberal. I dig it as a pseudo-continuation of Bronze Age Martian Manhunter stories with loads of raw material ready for use to other writers. The published material is itself a slog, though.