Despero had mixed feelings about the ouster of Doomsday by a popular vote of 70% out of 20 respondents. While the beast was a potentially lethal and likely uncontrollable adversary, he was also a weapon of ultimate destruction that could be unleashed upon even the most powerful super-heroes. While this decision will see Doomsday out of any future Menagerie melees and local spotlight opportunities for the foreseeable future, he will remain in the Vile Census, with potential for a return to the fold. Professor Arnold Hugo is from Gotham City, and according to his family history, his ancestors played a major role in the city's development. When their contribution failed to be acknowledged by the local historical society, Hugo was so offended that he subject himself to a brain altering experiment, then unleashed a string of mad science menaces on other Gotham descendants. In his boldest scheme, Prof. Hugo nearly destroyed the planet before being defeated and imprisoned by his first foes, Batman and Robin, in his only ever feature length villainous role. 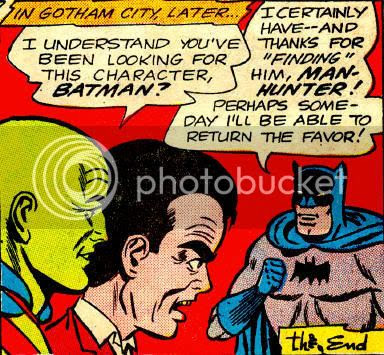 Essentially, Hugo's origin and reason for existence was tied to Gotham City. When he reappeared in a later issue of Detective Comics, these same origins were revisited. After a brief escapade in Middletown, the Martian Manhunter turned Hugo over to Batman at the end of the guest appearance. J'onn J'onzz basically acknowledged the Dark Knight's ownership of Hugo. The only reference book the character has ever appeared in was 1976's The Encyclopedia of Comic Book Heroes, Volume 1: Batman by Michael L. Fleisher, although he was minor enough to be misidentified as Professor Hugo Arnold (which was not corrected in the 2007 reprint edition.) His last appearance anywhere was a 2010 issue of DC Super Friends, where he was modeled after his first appearance and fought Superman and Aquaman. On the other hand, the Wizard of a Thousand Menaces made three appearances in the Manhunter from Mars strip running in House of Mystery from 1965-1967. Hugo was visually revised from being squat with brown hair to tall and lean with black hair and distinctly different facial features. Despite Hugo remaining mobile, he managed to run into J'onn J'onzz in entirely separate locations, once on a different continent. Unlike Batman, Hugo actually sought out the Alien Atlas in one instance for revenge, and featured into a total of five encounters. Despite his ties to Gotham City, Hugo has had no recorded stories there since his debut. Professor Hugo was the first villain to face Martian Manhunter in a solo adventure more than once, and in fact did so four times before 1966, when the Martian's next ongoing adversary was created in the form of Mr. V. Hugo has also battled J'onzz's sidekick Zook four times more than he ever has Robin the Boy Wonder. Where Professor Hugo is an insignificant and forgotten one time Batman foil, he's one of the most memorable Martian Manhunter adversaries of the Silver Age. Which is more important, where Professor Hugo started from, or where he went afterward?
Posted by Diabolu Frank at 12:00 AM

No brainer, even with the Bat ties.

Doesn't hurt to have a mandate, though. Plus, I've had some legitimate surprises. I wasn't sure which way Doomsday would go, and he ended up thoroughly annihilated. So, of course I'll start running a bunch of Doomsday/Manhunter battle synopsizes as soon as possible. :)

I think that Professor Hugo does indeed belong in the Vile Menagerie. He is more an individual foe than a team foe. (Doomsday and Darkseid are more foes for a team. On the other hand, if J'Onn was actively himself instead of Bloodwynd in that initial encounter, it would likely have delayed Despero longer.)

I don't know what plans DC has for the Alien Atlas as he we await his departure from Stormwatch, but I hope that the writers and editors will make a few nods to J'Onn's past.

Bloodwynd/Rott was quite powerful while conjoined with the Martian Manhunter. If anything, I think J'Onn J'Onzz has had a demonstrably weaker resistance to Doomsday on his own. Bloodwynd held some ground, whereas J'Onn has typically been steamrolled.

So far, Korge and Hugo have been flying through voting at 100%, which firms their roles and makes it feel less like the VM is hemorrhaging. The next candidates will have more of an uphill battle.

I've been grazing SDCC coverage, but haven't gotten any bites on the Sleuth from Outer Space. Anybody hear anything? Is anybody even asking around?

Here is a quote from the New 52 Panel.

"Starting in January, Justice League readers will find out more about the time Martian Manhunter spent on the team and what went wrong with that situation."

Aota, thanks for the update. I would like to see what the DC editors have planned for J'Onn. I don't think his time on Stormwatch harmed him, but by next month, he will have beat up and left both teams that he has been associated with in the new continuity.

January? It's the middle of summer. How about I just stop buying DC Comics for the next half a year? Think they'd be cool with that?

I'm not though. I totally plan to continue picking up National Comics for now. Getting close to done with everything else, however.

I especially like the Detective Comics ties that Hugo has. My vote almost always leans to the Silver Age.

"Starting in January, Justice League readers will find out more about the time Martian Manhunter spent on the team and what went wrong with that situation."

What went wrong? Hmm. J'onn living up to that moniker of Patron Saint of the Losers?

The funny thing is, with two violent breaks from majorly powerful super teams inside a year, the Martian Manhunter is kicking ass right now. You know, like that time he made Superman bleed, then vanished for the 1970s.

Haha. So in twenty years, he'll have a solo series again?

J'Onn is far more visible than he was in the 1970s, between animation and comics. So, I think that we will see a team series, maybe some reconciliation with other major players in the DCnU, and perhaps preparing for a few major threats. J'Onn, instead of being the Patron Saint of Loners, seems to becoming a force to be reckoned with in the DCnU. Perhaps, as an alien with no particular ties to any city or nation, he worries about the fate of the Earth. Having lost one world (or two if Mars II is in the new continuity), I don't think that he will want to lose another one. I think that Frank had a good idea with the team we saw on the free Comic Book Day preview of the Trinity War.

Oh, J'Onn's totally going to turn up in Trinity War in some fashion. Why else gank him from Stormwatch and replace him with that fan favorite Etrigan? Admittedly, the Demon's '90s solo series outlasted J'Onn's by a couple of years, but Lobo was pretty much second bill for half that run, so it evens out.