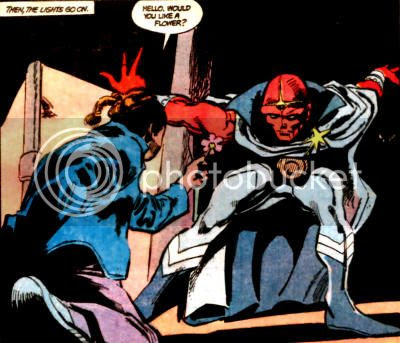 "There is no more fertile ground for the weed of hatred than the heart of a broken man." --from the teachings of Rahani

C.I.A. operative Charles Brigham Dade was drinking himself stupid and angry while listening to a news report covering the death of Deidre Johnson and the 30-40 soldiers at the hands of the Saturnian robots in New Jersey. A Princeton professor disputed the likelihood of there being actual alien invaders, which provoked Dade to smash his television set to pieces with the butt of a unique rifle.

Crazy Freddie led Luther and Jemm to a foul smelling, poorly lit den, where the Prince was attacked. It turned out to be a gang of boys Freddie had trained to be pickpockets. Freddie had a good laugh over this prank, while Luther pouted over the stunt. Peace was made through a flower presented to Jemm by Rosie, the only girl in the group. Crazy Freddie clearly adored Rosie, who was no thief. "She just... shines! By that, I mean she's got ESP! Sees things that are gonna happen!" Luther didn't buy into any of that psychic stuff, but Rosie was undeniably a sweetheart.

At the Pentagon, military police pursued an intruder who had broken into classified C.I.A. files. The spy escaped, and turned out to be Superman, who successfully sought the skinny on Dade. He was suspicious when he turned up nothing on Claudius Tull. Meanwhile, military brass fretted over the second break-in in as many days, the first costing them their experimental Krypt-Kicker. 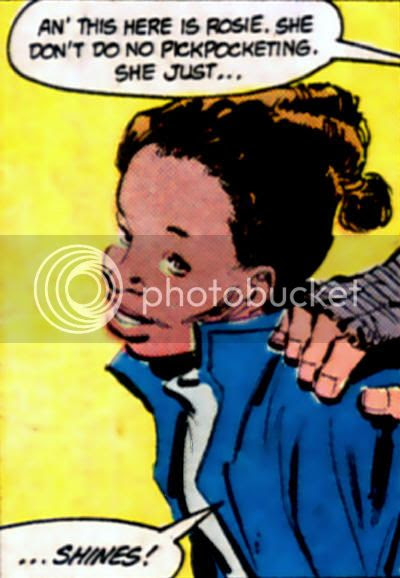 Three days later, "You take your punishment like a true Koolar warrior, Kamah! Yet still you do not see the magnitude of your failure!" Kamah was silent aboard the spaceship as she was whipped savagely by her Commander for failing to eliminate the Red Saturnian that had been detected, especially since the description she gave matched Prince Jemm. The session was interrupted by word that the White Saturnians had intercepted a video from Earth involving a survivor of the attack made on U.S. troops by their robot warriors. Claudius Tull was spying on Dade and Superman through a broadcast camera disguised on Bruiser's chest. The Man of Steel would be guided by Bruiser to Jemm's last known location, in the hopes a trail could be found that only a Kryptonian could detect. None of those heightened senses were needed to detect the liquor on Dade's breath, but Charles angrily if unsteadily jerked himself away from Superman's supporting hand to "get to work."

Rosie introduced Jemm to the game of jacks. The kid gang's leader, Calvin Crane, figured Jemm was too stupid to understand it. Luther defended "Jim," whose long fingers ultimately proved ideally suited for scooping up all the jacks inside the bounce of a ball. Superman crashed through a door, then Luther fingered Bouncer as one of the men who killed his grandfather. Jemm flew at Bouncer, but Superman intercepted, only to be tossed by the Prince out a window. Jemm determined that the "strange Earthman" was the greatest threat, and pursued Superman. The original Strange Visitor from another planet tugged on the Son of Saturn's cape, them threw him into a water tower. Superman caught Jemm in a bear hug, but the Prince escaped*, grabbed the Last Son of Krypton in one elongated hand, and tossed his headfirst into the street. Superman recovered quickly, and barraged Jemm with facial blows until they landed back in Crazy Freddie's den. "...It appears that this fellow's not really powerful enough to out-muscle me... over the long run!" 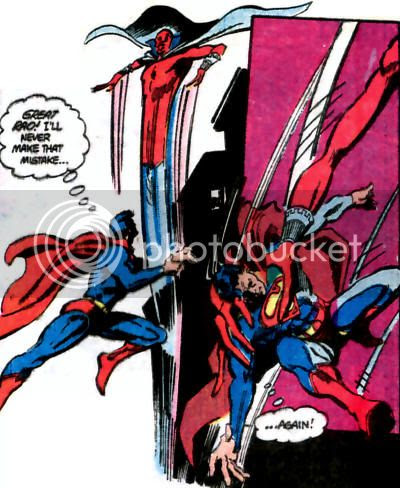 Jemm splayed out on the floor before him, Charles Brigham Dade drew the Krypt-Kicker concealed under his trench coat and prepared to execute the Saturnian. Rosie tugged at Dade's arm, begging him not to hurt the peaceful visitor. Dade palmed the little girl's face and shoved her viciously, driving her off her feet and sickeningly backward into a wall. "Shut up! Don't look at me like that! She was siding with that alien! You all are!" Superman had enough of this, and called Dade off, arguing for a page about Jemm's not matching the description of the metallic murderers of Johnson and company. Freddie and Luther tried to comfort Rosie, but she was "badly injured." Dade exclaimed, "In my book, the only good alien is a dead one!" Superman pointed out that despite appearances, he himself was not of this earth. "Yeah. That's right." Once Dade got over his shock about the missed observation, he grinned as he fired on Superman point blank, who doubled over unconscious.

With her head supported in Freddie's hands, Rosie predicted "You'll be sorry you hurt Superman, mister. He coulda helped you-- against the visitors--" The Saturnian robot warriors burst through a wall. Dade let out a scream as he was lifted up between the palms of one and his head crushed. The robots surrounded Jemm, Luther and Bruiser before the lot teleported in a burst of light. Several hours later, Superman finally regained consciousness and managed to stand. "What he sees are the empty shells where once lived two souls-- one whose innocence died long ago... and one whose innocence will never die. It is then that mighty Superman prays, for it was he who led Charles Dade to this place-- and he feels deeply in need of forgiveness." 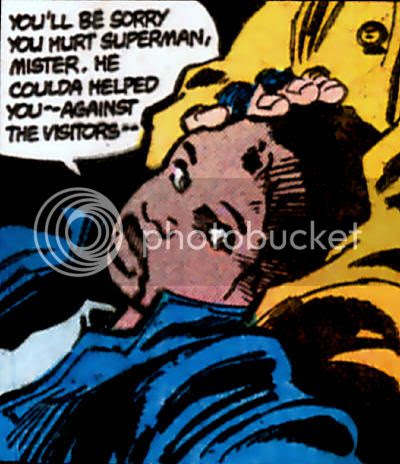 Jemm and his companions found themselves aboard a spaceship. "Greetings, Prince of Saturn! My name is Synn!"

"The Hunting" was by Greg Potter, Gene Colan and Klaus Janson. It was the most emotionally manipulative issue of a series that went out of its way to jack with the reader. I'm embarrassed to admit that the death of Rosie chokes me up a bit, even though she was as plainly born to die as Luther's grandfather in the debut issue. It's hard not to loathe Dade or get pissed at Superman, either. I strongly suspect Potter had read DC Comics Presents #27, and decided to serve the Man of Tomorrow another plate of crow.

*The art was unclear as to how Jemm escaped Superman's grip in one panel. He appeared to either fly up at impossible speed, stretch to free himself, or perhaps even turn immaterial. Regardless, "Great Rao! I'll never make that mistake... again!"
Posted by Diabolu Frank at 12:00 AM