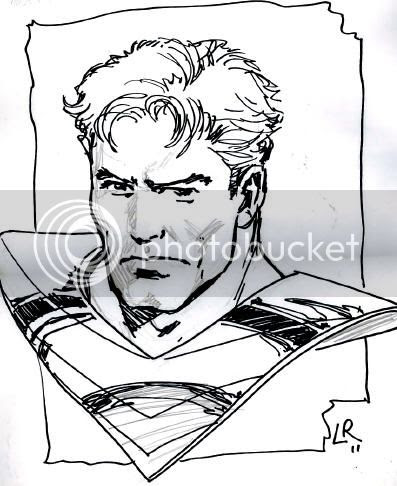 “An 11x14 chest and up shot of DC's character Triumph. While many know Luke Ross as a Captain America artist now in my mind he'll always be the fellow who drew Justice League America #92 which featured Triumph leading the eventual Justice League against an alien threat.

Luke seemed genuinely surprised when I asked him to draw Triumph (and a bit lost, though that tends to happen to any artist I ask to draw my obscure favorites). "Oh wow, that was from a long time ago!"

If I recall correctly, Ross drew Triumph's origin story/first full appearance. I like how the pencils serve as both structure and shading.
Posted by Diabolu Frank at 2:32 AM