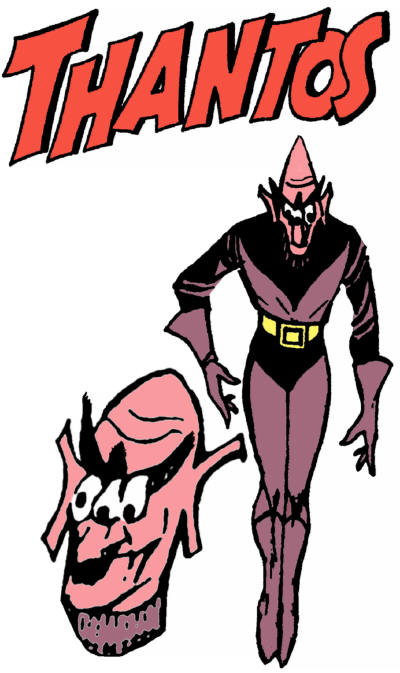 History:
Little is known about the origins or motivations of the so-called "3-In-1 Man." Thantos claimed to come from another dimension in search of ancient magical herbs that would allow his time-limited visit of Earth to be made at will. To this end, Thantos struck up a deal with a gang of crooks to help him locate the necessary items in exchange for his using his unearthly abilities to steal for them. These heists across numerous U.S. cities brought the attention of the other-dimensional imp Zook and his terrestrial mentor, the Manhunter from Mars. Across a series of encounters, the heroic duo managed to learn Thantos' plan, capture his human gang, and prevent him from claiming one of the ingredients that would allow him to return to Earth. Thantos was last seen shifting out of our dimension.

Powers & Weapons:
The full range of Thantos' powers remain unrevealed, but those displayed well countered the Alien Atlas. Thantos is superhumanly strong, seemingly invulnerable, and can fly. Thantos can spin his body at fantastic speeds, then use his pointed head like a drill. The towering alien can alter his height to an unknown degree, shrinking at least to the size of a doll. Thantos' namesake ability is to split into three copies of himself which can vanish through an unknown mechanism. However, Thantos' duplicates were never shown to interact with their surroundings, but rather disappeared at a touch, so they could potentially be illusory. Thantos' triplication seemed to be triggered by impact with an unyielding force, and it has yet to be revealed whether this force is necessary for the replication.