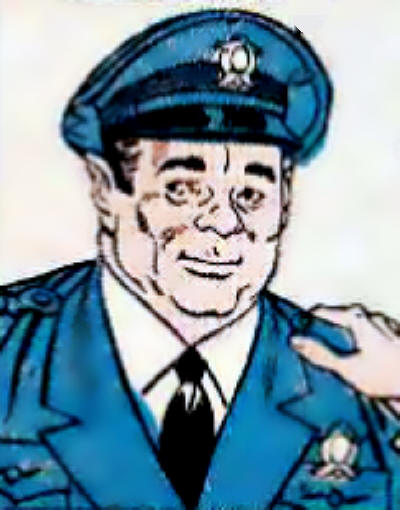 History:
Pat Brady served unexceptionally on the Middletown police force for forty years before retiring. In that time, Brady had made the acquaintance of Detective John Jones, and expressed sadness on his last day over a lack of important arrests over the course of his career. Sympathetic, Jones decided to use his secret Martian powers to help the officer go out on a high note. A truck reported as having taken part in the Jason Warehouse robbery was made to crash in an alleyway, and the aging officer gave chase on foot. Discreet extraterrestrial intervention slowed the robbers' flight enough for Brady to capture the lot without incident.

Later, Jones uncovered another robbery at a factory, but was felled by a blowtorch triggering his Martian vulnerability to open flames. Jones fell unconscious for three hours, then returned to his precinct afraid that he had placed Officer Brady in harm's way. Instead, Brady had recalled his lab training with the force, and using pumice powder located within the chemical plant, had managed to subdue the robbers as they choked on the irritant carried airborne by a fan. A retirement party was thrown for Officer Brady, who was scheduled to receive a "Most Perfect Officer" award even before his heroics of the day.

Quote: "That's being the smart boys! Just keep your hands up, and we won't have any trouble!"

Created by Jack Miller and Joe Certa
Posted by Diabolu Frank at 8:22 AM