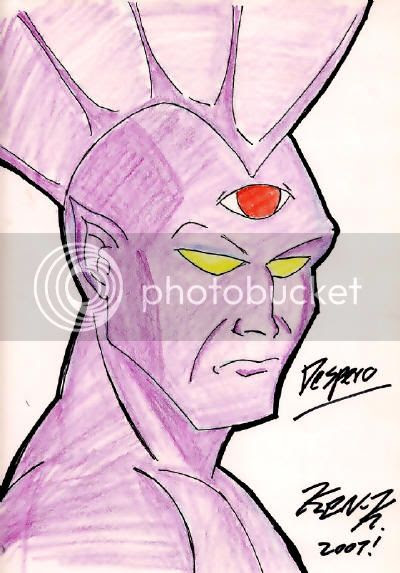 So I have about a half-week or so worth of material that I wanted to cover during October Commandeered that I thought I might shoehorn into the first of December, but the video is only a third done and Blanx's Master Characters maybe three quarters. I don't see myself finishing either, since I've got to do a bunch of work I've been putting off for months to renew my license for a career that I'm increasingly disenchanted with.

Maybe it's just the holiday blues, but beyond my personal discontent with real life and frustration with the mounds of partially finished hobby blogging I can't publish, I'm also feeling down on the human race in general. Movie critics are contemplating what an actor's death means for a franchise before the body's cold. People are trampled to death by throngs of supposedly normal shoppers to buy discount electronics on Thanksgiving. Corporations are "people" that actively work against the basic needs of the less philosophically murky flesh and blood folk while half the afflicted population cheers on their taskmasters. The environment is steadily, violently turning our hubris into the stimulus to kill thousands with numbing frequency, not that we have much reservation about destroying one another directly. I don't believe I'm living in the end times, but I think I'll be lucky if they don't graze me on the way out if old age claims its due instead of some other dumb, likely avoidable demise.

So, today, I happily let Despero shed his disgrace on me. I've got a fair amount of Kalinorian content left over from 2012 ready to post at the click of a button. My dissatisfaction with the earth pales in comparison with the burning Flame of Py'tar. The rule of an absolute alien despot would at least settle all this partisan squabbling, and if Despero just blows the whole damned planet up, there'll be no more misplaced hope squelched in the blackness of oblivion. But until then, I think I need an "Ænema...*"

*NSFW
Posted by Diabolu Frank at 3:51 AM

Frank, at the risk of touching on politics and history, I believe that our era has much in common with the Gilded Age, when crassness of commercial wealth and the crassness of some public figures made the world seem a grimmer place. Yet, there were still those with hope who helped herald in a better future than many suspected would come to pass.

Ultimately, one of the things that draws me to J'Onn J'Onnzz is that this is a Martian who -- in the face of tragedies that would likely drive many to madness, despair and suicide -- still believes in the power to do good, to shape a better future for his adopted world and its people, even if he his honest enough with himself that he will never be part of the humanity that he admires and loves.

This may not give you much hope or comfort, Frank, but no that you are not alone. I am facing a few challenges and moments of despair myself. Yet I still believe in humanity's potential -- even if we will have to work hard to build a better future.

I thought it was just me, then I thought it was just a fact of getting older, but I've grown so disillusioned with the world and with humanity as a whole. It's only December 2nd and I'm already sick of Christmas and the least of my bitterness. I sit around trying to figure out what went wrong in the past ten years, but all I can think is that life in the 90's was awesome for some inexplicable reason. (What's really sad is teaching the next generation--who are already bitter and disillusioned about the future by high school.) Sheesh, at least we had a childhood before we had to start worrying. It's a sad, mean world with no justice, what can I say. I guess we just need to find the good stuff in all the bad.

Anyway, I would like to say that I am grateful for your efforts Frank, and for the collegial atmosphere here. Coming here is one of the highlights of my day.

will, you've got a great point about J'onn. To me, J'onn has a better perspective on morality and justice than a human could. Lately I'm less drawn to morally gray Machiavellian anti-heroes...I need a real hero.

Will, congratulations on taking my whining and using it to create beautiful sentiments that reflect the blog's subject. Best wishes on overcoming your own difficulties.

Liss, I can relate to these kids through a shared bleak future from an early age. I escaped into books, comics, toys, music, TV and movies, because that's what I had available. They have the internet, which encompasses all those things and more. If texts and tweets give them comfort and distraction, can I really claim moral superiority when I run a daily blog devoted to a minor fictional character? What I find disheartening is how small their world can be-- a sampling of everything and a knowledge of nothing. Also, too much petty gossip and sarcasm, turning the entire planet into a backwater.

I like true blue heroes, compromised anti-heroes, and outright villains. I like it even better when they interact and react. The reason why I gripe about DC's comics and movies is their homogeneity; slight variants on a single dictated flavor. I want variety, and I want to be challenged.