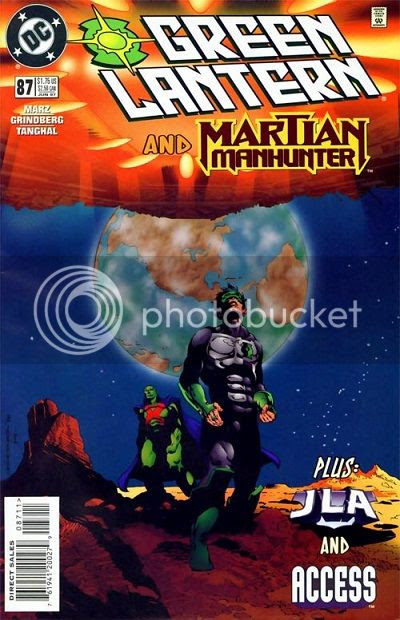 I know of Shawn Engel through out mutual internet friend (and one of/the earliest commentators on this blog) Luke Jaconetti, with whom he produced a three episode podcast covering the 1995 DC Comics crossover "The Way Of The Warrior." I listened to the trilogy, and wrote a response to the first part that was so long and involved that I converted it into a blog post. I actually have commentary for the other two that I should just email directly to the guys, since they've been sitting in a queue four months now.

Anyway, while I enjoyed the shows involving Hawkman, Wonder Woman, Guy Gardner, and the rest of the Justice League, Engel's podcast focuses on Green Lantern Kyle Rayner, who I'm not passionate enough about to stay tuned regularly. That's too bad, because #87 featured a GL/Martian Manhunter team-up, and Engel had invited me to participate a few weeks ahead of "broadcast." Unfortunately, he contacted me through the Idol-Head's obligatory, scorned, bi-annually accessed Facebook page, so I was unaware until it was too late. I actually have a history with that specific issue, but it'll keep for another time. Engel will get around to DC One Million in a few months, after all. In the meantime, enjoy this podcasting missed connection, and thanks to Shawn for the shout-out within...

Posted by Diabolu Frank at 3:55 AM