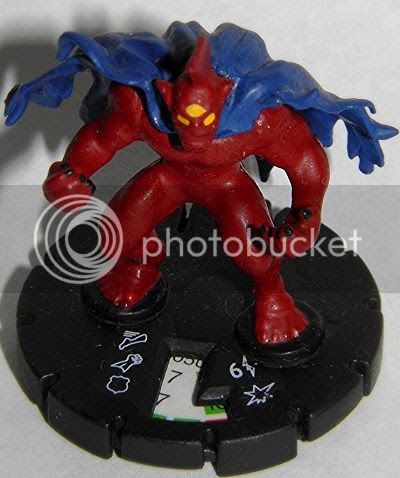 Here's a wicked custom of early '90s Despero, which you can see much bigger and from an additional four perspectives by clicking the link.

"So yeah, I'm a little late, but whatever, I was busy. This is Despero, the world conqueror from the Justice League. He was always kind of a joke to me until I read the 80's series when he became this hulking genocidal madman you see here. In this incarnation he killed Steel, Gypsy's parents, and countless other innocent civilians. All this while wearing the United Nations flag as cape. Now, I didn't put the UN symbol on the cape, but I'll get around to it when I'm better at this.

Recipe: He's almost all Etrigan. I sanded off the spikes and belt, and then I trimmed the ears a little. Next I sculpted the head fin out of greenstuff. Then you're all set. He's ready to tear into the Justice League!"

Posted by Diabolu Frank at 5:36 AM