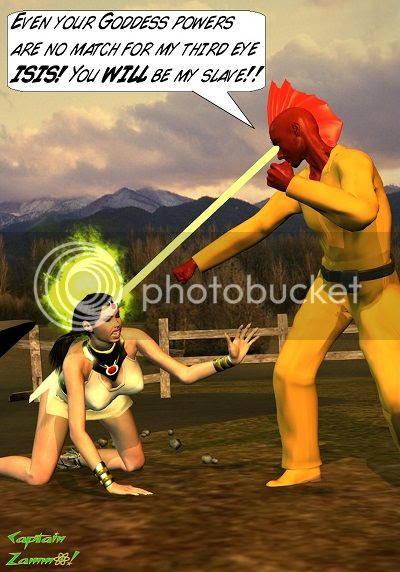 "The Evil alien from the JLA has returned! But since he needs a retinue, he's going to control the minds of superheroines to allow him to take over the earth. Can Isis stop his evil rampage?"

Posted by Diabolu Frank at 4:04 AM

On an unrelated note, do you ever plan to round up and categorize the Atom's villains on the Might Mite blog like you have done with the Vile Menagerie?

I did plan to do that, until I started reading the actual Atom stories and realized the Tiny Titan has the single worst rogues gallery of any major DC Silver Age hero. To put it in perspective, while comparatively minor, the Martian Manhunter appeared in about 133 solo stories from 1955-1968, often involving mad scientists, sorcerers, international crime cartels, alien invaders and ancient monsters. The Atom only appeared in 41 "solo" stories from 1961-1968, if you don't discount five team-up issues with name heroes. The Mighty Mite mostly fought unexceptional thugs, often from bygone eras via the time pool. He's essentially just got the Plant Master, Chronos, Dr. Light, Ion Mask, the Panther, the Thinker and the Bug-Eyed Bandit, many of whom are rather tenuous/shared. Most of those guys are already represented in online biographies, so I don't see what I could add.

Well its really only Chronos and Plant Master that are shared.

Also you could add villains from Power of the Atom.