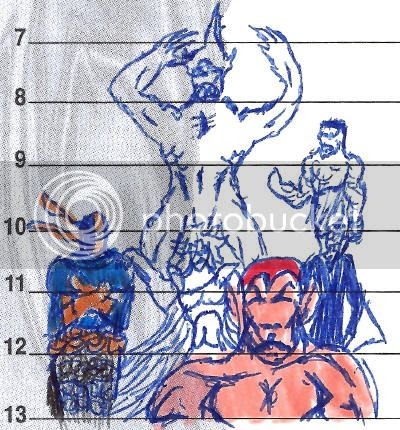 Here's that line-up doodle I mentioned the other day. It was part of the premise for my big late '90s fanfic crossover that exists only in my tired old brain and will never be realized. If I remember correctly, there was a group of very powerful beings in Kingdom Come called something like "The Omnipresence." I came up with an evil counterpart-- a confederacy of the most powerful DC deviants who would wreck havoc on the universe to reach individual ends. One of the conspirators was Eclipso, who possessed the surviving members of the Magnificent Seven JLA (a few had comic book deaths to be reversed by epic's end) to act as his soldiers. To counter the eclipsed League, a Malevolent Seven would be brought together, consisting of villains powerful enough to defeat each conscienceless hero at full unbridled power. Geoff Johns recently did something similar with the Justice League of America, except his team was designed to have members that paralleled the JLA who still had no chance in hell of emerging victorious one-on-one. Different strokes, and hey, Johns' comic book career is a tad more successful than mine.

I've never understood why in the past fifteen years Kevin Maguire's 1987 cover to Justice League #1 has been swiped a few dozen more times, while Howard Porter's JLA #1 remains ignored. I took up the gauntlet with the above homage. Please remember that the original doodle has been enlarged several hundred percent from a sheet of Diamond Distributors 15th Anniversary stationary. Despero was the countermeasure for Martian Manhunter, because 'natch. I think Major Force was against the Kyle Rayner Green Lantern, since it had taken a team-up with Warrior to stop him around that time, and I just think he's a tough dude. I called up Brainiac for the Wally West Flash, since there was no true equal for the Speed Force avatar, so I figured to aim for his mind. Amazo was a weak link opposite Superman, since the Man of Steel had beaten him in the Bronze Age and lesser heroes did the same since. I think I might have been saving Superman for a Captain Marvel battle. See, another major concern of this imaginary story was sidelining big name heroes to spotlight viable but underutilized heroes like ol' Shazam. Moving on, Deathstroke tore up Batman in an early issue of his solo series, and I used to be a big fan, so he was in. Maxima was my Wonder Woman analogue, since she had all of the Marvel Inhuman Sersi's powers, which kind of made her Circe on steroids. Were I to do it again today, I'd have used fewer Superman villains and more character-specific and DCU ones. Also, I'd have dug up somebody for Aquaman, but it's not like any schmo couldn't do. Everyone knows Aquaman's an unpopular loser.

...Note they have 3½ times more followers and H'ronmeer only knows how many more page views, in case you missed the sarcasm. I just hadn't picked an Aquafoe. I crafted an entire weekly series devoted to making Aquaman cool in my brain, only for Johns to render it moot years later, but don't underestimate my interest in the hero.
Posted by Diabolu Frank at 3:43 AM