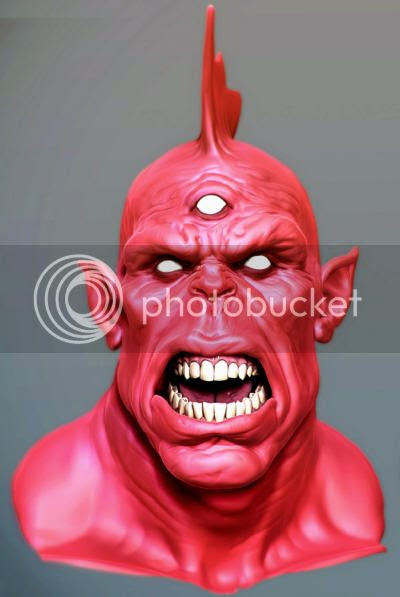 I know that I kind of phoned in this December of Despero, but 2013 has not been my favorite year, and there was probably more Kalinorian content day by day (thanks to deviantART) than ever before. Still, I wanted to go out with something special. There's been a lot of Martian Manhunter/DC movie fan casting, both on the internet and right here on the blog, but Despero hasn't been given nearly as much face time. I'm tired of unimaginative people continuing to echo Wizard Magazine's ancient suggestion of Keith David's voice for Despero (weren't Black Panther, Goliath, Apollo, Spawn, Mongul and cartoon Despero enough?) and I've been bummed by the lack of CGI representation. Well, thanks go out to "Bad_Koala" for fixing half that gripe, and offering up the best possible villain for a Justice League movie (as opposed to the New Gods.) I screwed around with Mr. Pralier's art quite a bit above, so you owe it to him and yourself to view the original two perspectives of Despero's head at high resolution on CGHub. It's glorious!
Posted by Diabolu Frank at 4:57 AM

Weird, I was just talking to my cousin the other day about how everyone she talks to says that 2013 has been a lousy year. I swear, there's something to this idea of a Global Consciousness (Google it.)

I'm really hoping 2014 will be better for everyone!

And this "quick" digital art is pretty cool. I find it simultaneously depressing and inspiring when someone can just whip up something like this and call it a quick sketch.

I'm guessing he customized it from a wireframe model, which would allow for relative "quickness." The guy's also a video game pro with a lengthy resume, which surely helped.