Artists of the Decades 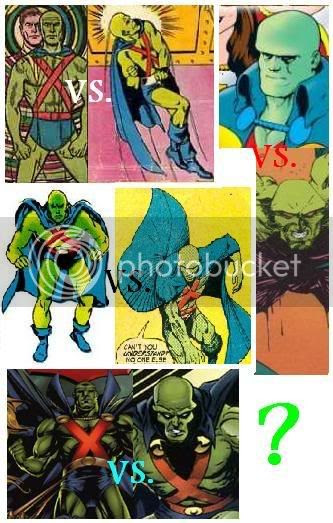 At the right of this column you'll see button links to story synopsis I've written for Martian Manhunter comics of the 50's, 60's, 70's, 80's, 90's and aughts. All were considered "canonical" at the time they were published, as I plan to create separate sections for "Imaginary Stories." I also added too-long overviews of each decade of the Manhunter from Mars' history. To try to capture these eras, I chose a snapshot from the defining artist on the character for each decade. I thought I'd share the process...

So, what do you folks think? Did someone get the shaft, or was I fair?
Posted by Diabolu Frank at 9:41 PM

Labels: Barreto, Martian Manhunter, The Rock of the JLA

Was that Kevin Maguire's work in the pic in the top right corner of the montage? Dang. J'Onn looks like Richard Kiel as a Kanamit.

If referencing a Kanamit was a geek test, I failed (passed?) Thank you Google for edjumicating me.

That's a latter-day Maguire from the cover of his "Modern Masters" edition. A period-specific headshot was used for the follow-up "Favorite Stories" post. Though he chased Porter & company at one point, I'd say that image actually looks like late 50's/early 60's Joe Certa, the Martian Manhunter's "thug" years.