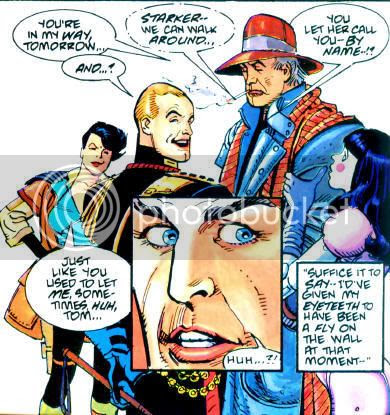 Prologue: Blind Homer Glint chased his talking cat F'tatatita around the room. It acted as his "substitute retina," and F'tatatita prancing about was making Homer uneasy. Glint found an old pistol of his, and tripped on a memory...

Star Rovers: Homer Glint was a sarcastic presence, but unfailingly "printed the legend" as a journalist, which kept gods' mouths near his ear. Rick Purvis was a sports star who consistently struck first, and never bothered with any questions after. They were linked through Karel Sorensen, Glint's ex and Purvis' current, another journalist with a camera implanted in her eyes.

Through his association with the Museum of Space, Glint found himself trying to negotiate a peace with rebels in a hostage situation. These would be the eugenically-engineered intelligent simians that once served as a work force, but fought for independence.

Manhunter 2070: John Starker was the head of the strike force meant to raid the camp. He sympathized with Glint and the rebels, but would only allow a fifteen minute dialogue before going in.

Star Rovers: Rick and Karel were among the "hostages," but the latter's gonzo journalism style had made her chummy with Bruno, the rebel leader. Homer arrived to make headway with Bruno, until Rick pulled a gun.

Manhunter 2070: John Starker led his force in after the shots to neutralize the target.

Star Rovers: After everything settled, Rick expressed his displeasure at how Karel had allowed Bruno to touch her "that way." Karel accused him of secretly liking it, so Rick drew a machete and decapitated the captive Bruno. Karel caught it all with her "camera," and Homer spun the murder into a revered act of heroism. Glint hated himself for doing it as much as he hated Purvis in general, but that's just how they both handled themselves.

Tommy Tomorrow and the Planeteers: "If, as the English poet put it, vanity's name is woman-- then psychopathic ego out of control is surely called Tommy Tomorrow. Tomorrow never got over being an orphan-- never knowing whether he was born of woman-- or petri dish... it made him a xenophobic monster, obsessed with eternal life... and I made him a legend in his own time-- a hero of the first inter planetary war..." Tomorrow barely recalled the name of his fellow officer Brent Wood, who was aiding him in his search for the last of the Methuseloids, a race key to immortality.

Star Hawkins: A.K.A. Axel Starker, a cold, hypercritical private investigator only willing to see rules bent when they suited him. This included carrying an illegal, concealed Magnus device to lethally bridge the gap between human ability and the superior strength of robots and other species. This was used in the robot-dominated Mexico to enter a cybernetic brothel in which humans were prohibited, killing a robot and a human, as well as alerting police.

Manhunter 2070: Found in bed with four robot whores by his brother Axel. "I'll be easier on you when you outgrow this disgusting obsession with robot sex..." The pair had to sneak away to escape arrest.

Manhunter 2070: A cease fire was in effect until morning, as the Methuseloid camp had taken prisoners, including Tommorow's wife Brenda. Starker called it a night, and Tommy Tomorrow waited until Starker was out of earshot, then made up a pretext to attack. In the aftermath, "He lost three officers-- including his pregnant wife-- and wiped out the remains of a race that was antique when man was... baying at the moon... but Homer Glint made him out to be a hero on the inter-link-- and it stuck-- What stuck for me were those shots of me with that robot in church... They court-martialed me... and I was a forgotten man in three months..." The same only made Tomorrow more of a public champion, using private contributions to fund his own private militia.

Star Hawkins: Axel Starker didn't care about his brother's self-pity, or for his emotional attachment to a piece of his property. Still Axel needed John to retrieve the stolen/kidnapped Ilda, his robot assistant. "She" was crestfallen when it was fat, loutish and often drunken John Starker negotiating for her release, rather the her beloved owner-- regardless of John's affection and Axel's clear contempt for "her." It probably didn't help John was trying to haggle over Ilda's price with "her" current holder.

Tommy Tomorrow and the Planeteers: Decided to investigate what underhanded business his old comrade John was getting up to in his jurisdiction. Flabbergasted to learn John was in fact bartering with Brenda, Tommy's presumed dead spouse, who gave him such a slap. "Back off buster-- and stay backed... I don't look or feel any older-- but you had me declared legally dead eight years ago--" Though Brenda miscarried, she and her cohort Broome managed to escape the battle in a Methuseloid ship. It took fifteen years to learn to properly operate the craft and navigate it back to known space. In the meantime, they reverted to piracy, and though Broome died five years back, neither had aged a day. "They were right all along about the Methuseloids... but it wasn't some secret formula-- it was eating the little crits." For a price, Brenda gave Tommy "the cross co-ords" of the last Methuseloids they knew of.

Star Rovers: The trio had stumbled upon the Methuseloids first, and became collateral when Tomorrow and Brent Wood launched an unprovoked assault. Rick Purvis was killed in an explosion, which also caused Karel Sorensen's essence to merge with that of many Methuseloids at once. Sorensen ascended to a sort of divinity, which Homer Glint refused to look away from. Through her eyes, worlds watched the rebirth of Sorensen, while Brent Wood was the first person on hand to begin devout worship. Tommy Tomorrow was preoccupied with tearing apart Methuseloids with his bare hands and eating them raw. Though now blind, Homer Glint drew his pistol on Tomorrow to insure there would be no more hostilities. "You're just destined to forever be present at those focal points in history, Tommy... like now, for instance... Simply put-- you're going to live forever-- but Karel got to be God..."

Epilogue: Homer Glint held the pistol again, and considered his many sins. The Methuseloid corpses were used to grant everyone eternal life, with Karel receiving all the credit, as Homer was on hand to write her bible. Glint cursed himself for not having killed Tommy Tomorrow when he had the chance, instead of allowing him eternity to stew in Karel's shadow.

Review: I'm a fan of Howard Chaykin's art and innovations, but I generally can't stand his stories. At one point, Karel explained to Glint, "I dumped you as soon as I saw through that shallow facade you call a personality, Homer," and I like to imagine Chaykin had a similar conversation with one of his own girlfriends. I feel as she does. Chaykin seems to be exactly like his Glint, dispassionately relating stories of cruel, petty, stupid, and vapid individuals without serving any purpose beyond wallowing in their sordid nature. I can't imagine Jack Schiff, a proud social progressive who edited many of the adulterated here, would be anything but repulsed by this series. Schiff hated science fiction anyway, intending his books to educate and entertain children. Then again, I'm not sure who this series was for, beyond Chaykin fans. The characters are completely unrecognizable, yet stand poorly without the tawdry perversion of pre-existing properties. Finally, coincidence runs a bit thick here. How exactly did the Star Rovers find the Methuseloids, I ask you?

My dates in travels and investigarions are:

More information, about my Martianpedia (all english):

I've been working on a post that will reflect your observations for the last several hours. We'll see it soon. As for the zipped scans, U.S. copyright infringement aside, you are officially my God for the next few weeks or so, as I read through it all and weep gently from happiness.