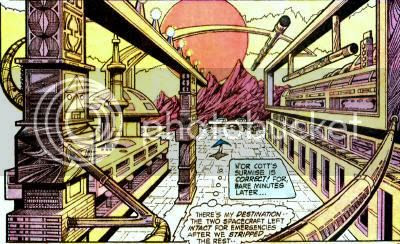 "Many light years from Earth is Mars II... a tiny world colonized by the survivors of the war that made the original Mars uninhabitable." Upon this adoptive world, the surviving Martians cannibalized whatever technology they could to construct the Spacefort, their colony. Similarly, most of the colony's advanced weapons were converted to tools. Therefore, few projectile weapons were available, and police were armed with swords. Initially, only two small spacecraft were left intact for emergency purposes, though the Martians eventually reconstructed an attack fleet through unknown means.

J'onn J'onzz was twice chosen as leader of the Martians at the Spacefort. The Keeper of the Sacred Martian Symbols, Re's Eda, was about to hand J'onzz the Scepter of State when Eda appeared to be assassinated. Instead, Re's Eda led every Martian man, woman and child out of the Spacefort in a march through the Primitive Zone toward the city of Baltaz. This force cleaned out the weapon armory and all military supplies at the Spacefort, leaving it deserted. Presumably, but not definitely, the Martians returned to the Spacefort after having been routed at Baltaz.
Posted by Diabolu Frank at 11:59 PM