I had hoped to go into great detail about my love for the Martian Manhunter action figure, but I used up my childhood stories a year ago, and much of the technical details of the line were discussed with the carded figure. Instead, I'll let the pictures (provided by the lovely Pekita Trotamundos) do most of the talking. 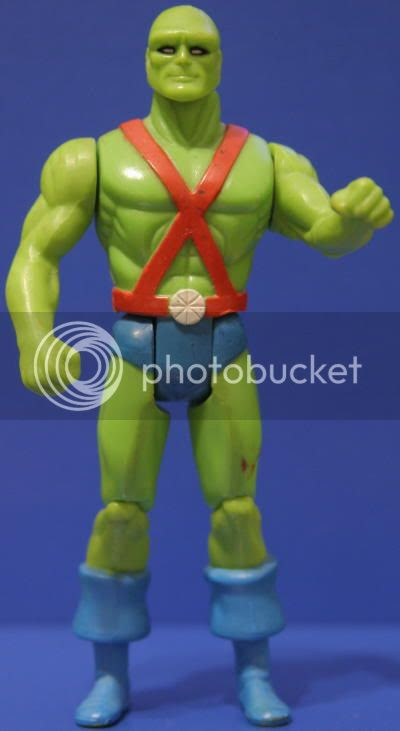 I'm quite sentimental about the "pie slices" icon on his belt, for no reason I can defend.

If you squeezed the figure's thighs together, his left arm would swing up in a "Power Action Martian Punch," while his left arm swung backwards to really build up steam. The detail and functionality of those arms were incredible in their time. By comparison, Superman was the biggest sissy with his two bent elbows always at his midsection.

Please forgive the many nicks, paint smears, and so on. I bought this figure second hand, and stored it in an uncomfortably tight drum with hordes of other mistreated figures.

As I've noted elsewhere, my original figure lost his cape about as quickly as I misplaced most accessories as a kid. I kept him from 1985/86-1989, when I loaned him to my brother. He disappeared forever at a juvie camp. 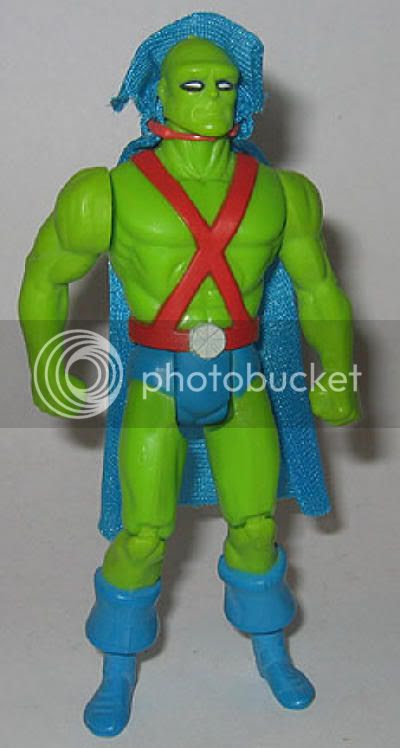 I found this picture online, blew it up, and smoothed out the rough spots. I hope the original owner doesn't mind, but I wanted to show off the cape (which folded down easily enough, as I prefer it.) 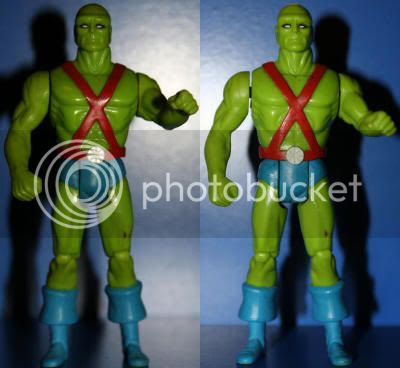 I liked the definition and mood in these shadowy pictures, plus you can clearly see the punching pivot mechanism in the right shoulder here. 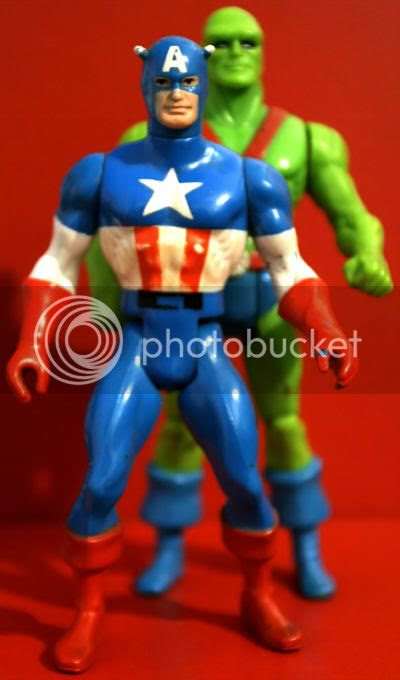 Pictured here is my second Secret Wars Captain America figure, as the original vanished into the woods with J'Onn J'Onzz twenty years ago. I wanted to show the difference in scale between the Secret Wars and Super Powers figures, plus these are the only examples from each line I still own, as they're personal favorite heroes. Both were purchased off eBay, though the Canadian I bought Manhunter from gave me a million excuses for it taking nearly two months to get the figure to me. I bought Cap American with no fuss, though I was burned enough in general at the time to avoid the auction site whenever possible to this day. Oh, and I'm totally wearing my new Secret Wars t-shirt I bought for $7.50 at Target as I type this. All hail Mike Zeck! 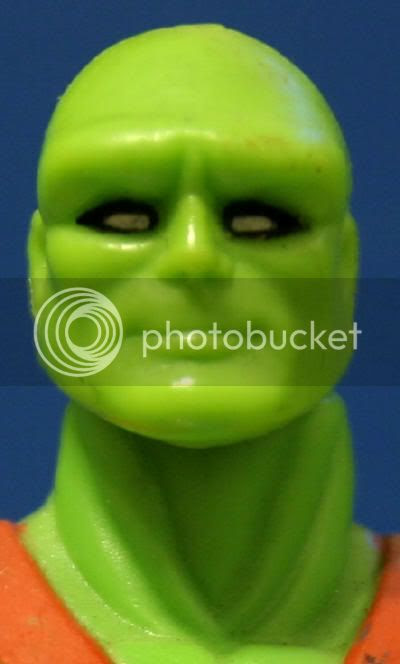 My poor girl took something like thirty head shots, and this was the best in my estimation. She doesn't shoot micro often enough to have the proper lens for this kind of job. I also chopped and altered all these shots all to heck. 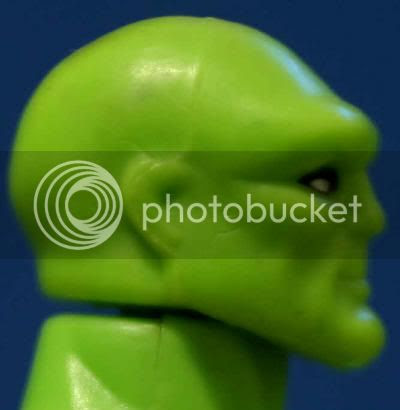 I love that gentle smile, the cheekbones, and of course the brow. It occurs to me I've rarely seen the comic book J'Onn with white eyes, and never wearing eyeliner. Those cauliflower ears are pretty upsetting, as well. Still, this will always be the Alien Atlas of my heart. 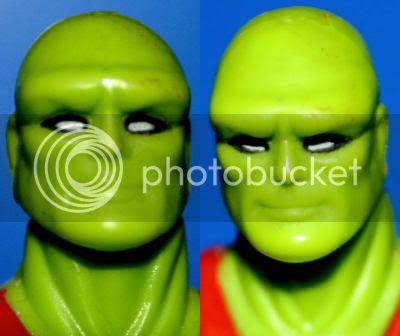 I like the pie slices, too. Early on in the Detective Comics back-ups, Certa stopped drawing them on MM's belt buckle. Do you know when they came back?

My Martian Manhunter is in better shape (still missing the cap, though), but my Cap is in much worse shape, so I guess it balances out.

I'd love to get my hands on MM's cape, along with Dr. Fate's. Those cloth capes really display great. And I always liked how they had custom capes -- not just one size fits all.

The smile on this figure is wonderful.

There's something so fantasicly "He-man/GI Joe" 1980's action figure style about this. I must find one now. :)

Sarah, the MM figure was certainly of its time, which is a definite part of its charm.

Luke, I love cloth capes as well. Plastic drapes can be dramatic on a static figure, but you can't play with them or adjust the drape. Boo hiss!

Tom, as best as I can tell, Mike Nasser/Netzer was responsible for the return of the pie. Certa only drew a circle toward the end, and then Dick Dillin just did a generic belt buckle. Nasser seemed to set the style back to early Silver Age with the brow/pie/etc., and was immediately succeeded by Curt Swan and Dick Dillin in that respect. Jim Starlin, George Pérez, Pat Broderick and Chuck Patton followed suit in the '80s, establishing the image translated into plastic here.