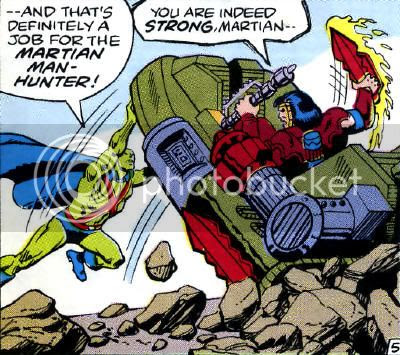 Hundreds gathered at the Star City Museum for a momentous occasion, that day's Martian Artifacts Exhibit. First Citizen Green Arrow agreed to accept Martian Manhunter's gift to the city in a public ceremony. J'Onn J'Onzz announced, "Can't wait for the Flash any longer! We'll have to start without him!" The Scarlet Speedster ran in, excusing himself as having had to search for a parking space that could accommodate the Delta Probe One. Green Arrow was nonplussed, as he prepared to "put the Manhunter's Martian Power-Jewel on display." The Manhunter hushed his fellow heroes, as Martian Hearing had detected something that would eventually crash through the museum wall-- Kalibak in his Boulder Bomber! "I claim the jewel in the name of Darkseid, master of Apokolips!"

Flash tried to talk Manhunter into waiting, but "No time! That maniac has to be stopped before he destroys the entire museum-- and that's definitely a job for the Martian Manhunter!" As the Alien Atlas lifted the Boulder Bomber nearly off its treds, Kalibak taunted "You are indeed strong, Martian... but strength alone means nothing against the power of my Stun-Spears!" Sure enough, "Kalibak's spear is ablaze with unearthly fire-- and fire is a Martian's greatest weakness-- G-getting dizzy... can't stand... H-help me..."

His friend on his knees, Oliver Queen proclaimed "The Manhunter's down! Gotta do something!" An Extinguisher-Arrow fired was intercepted by Kalibak's vehicle. Meanwhile, the Flash had run to his own ship, and collided with that of Darkseid's son. However, the Delta Probe One ended up buried in rubble, leaving Green Arrow to fire the dismounted Kalibak's own Beta-Club at his head, knocking him out. After Kalibak had been placed in the probe's "Prisoner-Pod," the Martian considered "I'd call it poetic justice, archer!" Like the jewel, Kalibak would end up on display-- behind bars!
Posted by Diabolu Frank at 12:30 PM