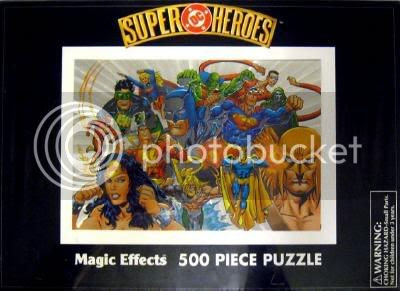 Courtousy of The Irredeemable Shag's Once Upon A Geek comes a pair of jigsaw puzzles for today, both still vacuum sealed in their original packaging from the Warner Brothers Store. This one is magic hero themed, featuring merchandising oddities like the Spectre and Dr. Fate, that latter not having seen much play since his '85 Super Powers Collection figure. Supergirl, Hawkman and Captain Marvel are there, but curiously, Zatanna is not. Finally, there's the Morrison/Porter JLA, though as drawn by the unofficial '90s Martian Manhunter merch artist Eduardo Barreto, you can hardly tell. Well, outside Kyle Rayner's crab mask, Aquaman's hook hand, and the always regrettable inclusion of Plastic Man. Shag says the puzzle was foil stamped, but do I detect some embossing here, or as that just the box?

To read more and enlarged art details, click here. While you're bouncing around, could somebody ask Rob Kelly if he's seen the Justice League of America Dolphins 500-piece Puzzle Tin. I stumbled upon it while doing research, and isn't it the most curious thing for The Aquaman Shrine?
Posted by Diabolu Frank at 6:30 AM

Another one with Our Hero.