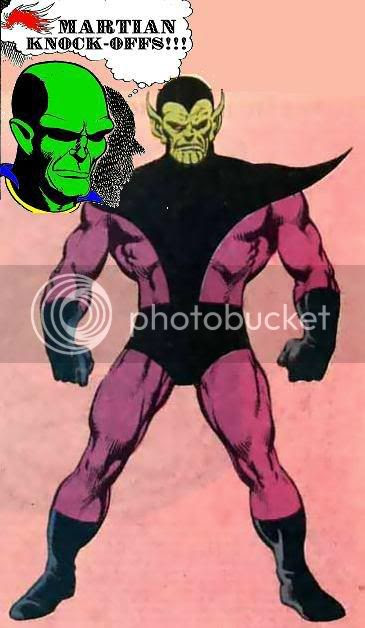 I've never understood why The Skrull race wasn't the one destroyed in Operation:Galactic Storm, instead of the Kree. I think Marvel just wanted to spite me. I mean, sure, being a green-skinned shapeshifting alien comic book race doesn't make them Martians. We could have just been "inspired" by the same cornball movies and bad pulps. I didn't really get ticked until I laid eyes on their Super-Skrull. Okay, right off the bat, the guy fights what was the premier Marvel super team at the time of his creation. The Fantastic Four would never even have existed if Marty Goodman hadn't had his fill of my pal Jack Liebowitz's bragging about the sales of the new Justice League of America at their golf game. The cover of FF #1 even resembles the JLofA's first appearance in Brave and the Bold #28. So this guy has all the FF's powers (like our Amazo, the one android JLA,) and that includes fire. So he's superstrong (like me,) can turn invisible (like me,) flies (like me,) and he produces my greatest weakness to boot! Foul play! Luckily, Super-Skrull is even less liked and respected than I am. I think he may be dead right now too. Eat it, hypercleftchin!
Posted by Diabolu Frank at 11:45 PM

LOL I've been thinking this myself for YEARS!