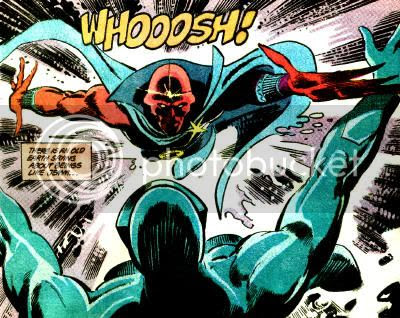 The "Superman: Two Worlds" panel at Comic Con International 2009 in San Diego touched upon both the Martian Manhunter and especially Jemm, Son of Saturn. This fact has mostly been overlooked in print, but can be heard on the DC Comics podcast page. Seeing as it's our specialty, I will now transcribe the relevant passages.

Beginning around the eleven minute mark, the topic turned to the "World of New Krypton" maxi-series, referencing the recently added planet to our solar system on which dwell over a hundred thousand Kryptonians. These particular Kryptonians were world conqueror back in the day, and their return stirs the interest of formerly colonized subjects like the Thanagarians. At the particular point Hawkman's people arrived before the restored Kryptonians, Superman's people had taken it upon themselves to move one of Jupiter's moons, as writer Greg Ruck explained, "'cause they need a moon." Co-writer James Robinson further elaborated:

I was like, you know, flip-- looking around at the various DC things, and I was like "Wow, there's another whole race in our solar system we don't think about." So, ah, at the end of ah, issue eight, as the cliffhanger; we're revealing our stories here; but Jemm, Son of Saturn is going to appear. He's now the ruler of an entire race of aliens that-- whose powers are akin to the Martian Manhunter's. And, someone said to me once, "Well, the problem with Jemm is he's sort of like the weak version of Ma-- J'Onn J'Onzz," and we're gonna turn him into, basically, the alien version of Namor. And he's gonna turn up, and say "Look, you can't start moving moons around in the solar system, you know. This came close to Saturn... doesn't directly effect our planet. If you do anything that endangers us, we're going to have to come down on you like you wouldn't believe." So, that cover by Gary Frank is superb... Jemm, Son of Saturn just looks cool.

Greg Rucka then jumped in:

You know what I realize what it reminds me of? ...It's one of the Frazetta Conan pieces, and it's very evocative. When you see it, everybody's "What is he on about?" When you see it, it'll make sense, but it really is this sort of classic. He's taken this sort of fantasy-- high fantasy-- barbarian trope, and turned it, sort of on its side and made this great science fiction trope, and it's-- it's beautiful. It's a gorgeous cover.

Editor Ian Sattler wanted fans to know the cover being gushed over would be available in two weeks from the then-current date (sometime around the second week of August.)
Posted by Diabolu Frank at 8:00 PM

Wow! This is fascinating news. Thanks for pointing this out.

I only sideways found out about this myself earlier today. If I hadn't decided to focus on Jemm this week, I'd have never known. Glad you dug the tip!

I think it was you who first pointed out that about J'Onn, that is the connection, at least visually to Conan the Barbarian. That's part of what I like about him, about the concept of the Martian Manhunter, that his race is so evolved that they work on a level organically connected to the environment, not unlike our ancestors who used as much brawn as brains, instead or just brains and laziness. The JLTF arch with Warlord I found consequently very enjoyable.

I don't think that was me, m.s., but I think your sentiments were insightful.

Thank you for saying so. It took some hunting, but it was you who planted the seed at least, with the last line of this post http://idol-head.blogspot.com/2007/09/rock-of-jla.html. I realized that I left out a thought from my previous comment...I meant to point out that most of the other DCU aliens (or even sci fi in general) use a lot technology, even the Kryptonians, arguably as evolved as the Martians, are awfully tech dependent with all of their rockets and crystals and battlesuits. When Apokalips invaded Mars towards the end of of the Ostrander series, the Martians just turned into giant beasts. No lazer rifles for them! (If you've been following the whole New Krypton thing, the Military carrys around rifles, despite having, you know SUPERPOWERS. Not a bad series though...)

Good lord, man! I haven't read that post in nearly three years, and I wrote it a decade ago! I like your thoughts, and will offer up a post on them shortly!