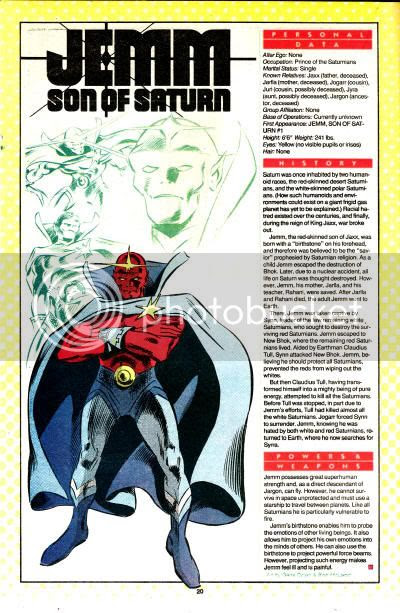 All in all, my only interest in Jemm was as a potential member of the Martian Manhunter supporting cast. I read Jemm's mini-series before his inclusion by Grant Morrison in the JLA story arc "Rock of Ages," and aside from it seeming improbable that he'd run willingly with the Injustice Gang (he didn't,) I only cared because of his role as J'Onn's opposite. Despite having read pretty near every appearance the character has made since 1984, he still feels like a cipher to me. He's basically E.T. as a super-hero. Jemm has the best intentions, is kind to children, doesn't speak much nor well, and only wants to return home in peace. Unfortunately, his gentle disposition has been perceived as too passive and weak by every writer that's handled him since creator Greg Potter, and so he's been repeatedly victimized for the sake of whatever story he appears in.

It occurs to me that as much as I loved J.M. DeMatteis' take on J'Onn J'Onzz as a pacifistic humanitarian in search for his metaphysical center, that's a very difficult stance to maintain in a super-hero universe. Even I love seeing the Manhunter from Mars get really ticked off and blast people with Martian Vision. Maybe the best compromise would be to transfer the spiritual take on J'Onn to the Son of Saturn, and allow the Manhunter from Mars to earn the inherent tension his name manifests in the hearts of evildoers. That way Jemm serves a purpose beyond being a bland doormat for every malevolent alien to come down the pike.
Posted by Diabolu Frank at 11:57 PM

I sincerely tried to get into Jemm when it was first published. However, it just didn't grab me.

Also, if you get a chance, check you e-mail. We're planning another blog crossover and would love to have you join us.

"every writer that's handled him since creator Greg Potter"

Ahem.
Greg Potter was as much a fictional character as J'emm himself.

Hmm...I kind of like J'onn best as the passive, philosophical heart of the JLA...it makes him unique amongst super-heroes. Plus, when he does finally get pissed off, it's such a change from his usual behavior that it's all the more dramatic and imposing. I had a teacher in high school who was always easy-going and laid-back...but when he finally had enough he totally let go so much that it scared the crap out of you. You knew you had you pushed him beyond a certain limit and you never wanted to see that again.

While it's probably hard to write, I think they need a philosophical character in the DC Universe to give some pespective. (But who will go all out if pushed far enough.)

Though I do see your point in giving a little dimension to Jemm...

Good points about J'Onn's demeanor, LissBirds. More often than not I agree, but frustration at his treatment gets me down.

As for Jemm, it seems like he's the one they're planning on making far less passive. Ah well-- decency never moved units.