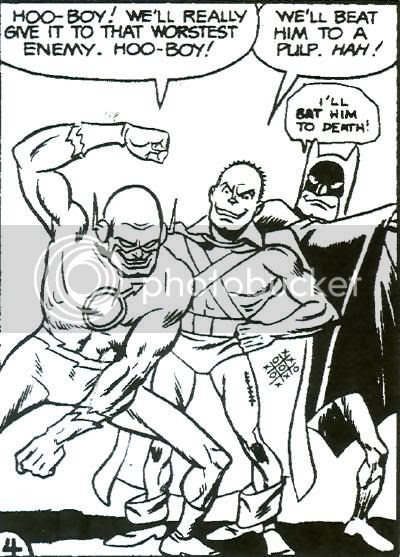 Twomorrows Publishing facilitated the return of Roy Thomas' fanzine Alter Ego as a back-up feature in the launch of their initial flagship title, Comic Book Artist, in 1998. Eventually, AE would spin off into its own magazine again, while CBA would be broken down into several other titles: Modern Masters, Back Issue, and to some extent even Draw! and Write Now! In the first new AE in decades, Thomas offered black and white reprints of Topps' 1966-67 super-hero parody mini-comics. 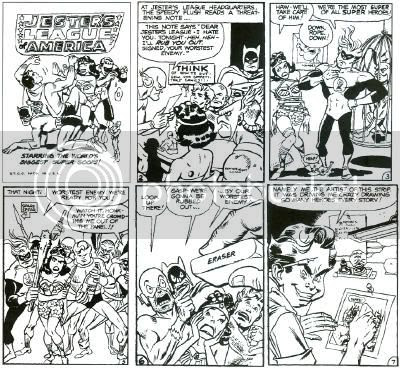 Measuring 2 1/2" x 3 1/2" and eight splash pages (counting front cover and bogus ads in the back,) the books sometimes featured Thomas himself. However, on the issue that pertains to this site, the work was produced by Len Brown (script,) Art Spiegelman (cover work,) Gil Kane (pencils) and Wally Wood (finishes.) A parody of the Manhunter from Mars was among the Jester's League of America, and popped up in two panels. Only his shiny bald pate showed on page 2, but he received a full body shot alongside an ersatz Flash and Batman on page 4. The team braced for a confrontation with their "worst enemy," who turned out to be artist Gil Kane, who simply erased them all from his work table. "It was driving me crazy drawing so many heroes every story!" I'm sure Mike Sekowsky got a kick out of it, at least.
Posted by Diabolu Frank at 7:00 PM

My condolences to everyone involved. I hope the checks cleared.