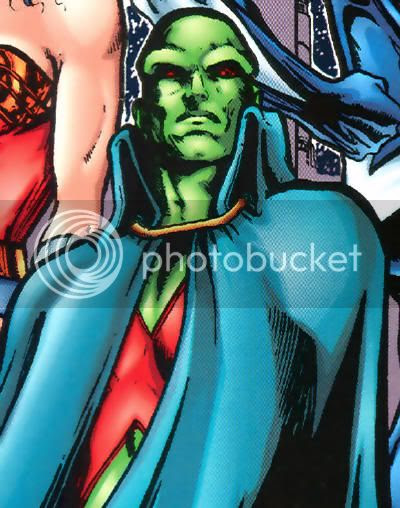 riot was a very short-lived magazine that aimed to be a hipper version of Wizard in a format more closely resembling Comic Scene. I'm not actually certain any issues were ever released to the general public, as the only one I've ever seen was this special zero issue given free to retailers as an introduction to encourage sales. Under a fantastic Phil Jimenez JLA cover was the decent Grant Morrison interview excerpted below...

Having proven itself worthy with its return to epic storylines and its acquisition of massive sales, JLA is the book to watch. But when finally cornered as to the secret of the series' success, Morrison only laughs. "The only reason sales dropped off in the past is that perhaps there wasn't a clear understanding of JLA's mythical underpinnings, which was what really gave the book its power. With JLA, you're dealing with concepts that are rooted in the mythologies of every single culture on Earth... When you look at each individual Justice Leaguer, whether it's Superman, Batman, Wonder Woman, Flash, Green Lantern, Aquaman, or even the Martian Manhunter, you can map them onto a different mythological character, and that's why they're so strong. That iconic power of the characters is what makes this book so successful. And with comics like the X-Men, you don't have that. You don't have characters so strong that they're almost gods... Superheroes are as powerful, as they are symbolic. They say so much, but even today, they have the potential to say so much more... Comics are incredibly sensitive barometers of social change. Just look at the way that Batman has reflected the culture over the years. This material has a psychological and a spiritual significance, whether we're embarrassed to admit it or not..."

"The Silver Age began when DC Comics editor Julie Schwartz and his little stable of writers revitalized the market with lively, science fiction-oriented heroes. Julie brought an adult point of view to mainstream comics, and what several of us have been talking about recently is that characters from that era, like the "Barry Allen' Flash and the "Hal Jordan' Green Lantern, were all 'grown-ups.' I read Gerard Jones' book, The Comics Book Heroes, and he pointed out that these were heroes who never fought amongst themselves; held interesting jobs; and had wives or girlfriends. They were just very together, unlike most heroes today. Even in their spare time, the Silver Age heroes just hung out reading books about science and tackling weird medicine."

"Looking at where comics are now, I also want to approach characters as adults... The last few years we've seen nothing but those tortured characters—the 'Dark Knight' Batman basically became a tortured adolescent—and what me and a few others like Mark (Millar) and Mark Waid (Flash, Kingdom Come) would like to do is bring heroes like Batman back as men. I'm talking about the Batman that I remember. The Denny O'Neil, seventies Batman with a big hairy chest, who was always kissing girls, and flying about in the Batplane all over the world..."

Though Morrison doesn't want to limit his audience to just kids—The Invisibles is definitely not a children's book—he does see the importance of bringing them back to comics. Of course, he also thinks that you'd have to be stupid not to. Working up cool ideas such as Justice League Junior—a hip and happening superhero team that would showcase younger DC characters such as Superboy, Mary Marvel and Impulse—he's setting out to attract the once prevalent, currently dwindling, younger audience, as well as attempting to safeguard the future of the industry he loves.

While I don't think he excretes gold, I think Morrison has a good grip on what's great about comics. The things that bothered me about infinite crisis and identity crisis was the inter hero hate. These characters are supposed to be saviors, pinnacles of evolution, yet resort to petty infighting every other second. Also, one of the few Jimenez Manhunters I can dig. Weighty cape = mysterious and badass.

I don't mind infighting where appropriate, like the more testosterone fueled Avengers, or that low class mutie scum on the X-teams. With the JLA, it always seems forced, because at the very least the World's Greatest Super-Heroes should be professional with one another. They're supposed to be role models, after all.

I was a big Jimenez fan for several years, but you're right, his Martian Manhunter usually seems too small and human looking. The haughtiness displayed here works better, and I love the heavy cape.