Which was your favorite Martian Manhunter Comic Book "Era?" 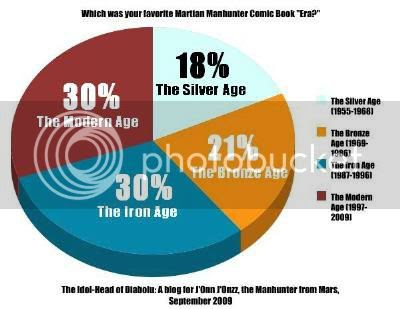 I make plans, and God laughs, so here's poll results instead of something, you know, interesting.

Thirty-three people voted in the latest poll, and for most of the month, it was very nearly a four-way tie. That really surprised me. Not only did the Bronze Age perform way above expectations, but it actually defeated the Silver Age by a vote. Did folks put out by my month long inactivity on the Justice League Detroit Blog sneak over here and stuff the ballots? I swear I'll get that "Super Powers: Vixen" post up inevitably. Amazingly, I finished the "art" weeks ago, and only the "story" is holding me up. Oh wait-- I'm getting sidetracked...

I have the same love/hate relationship with the Bronze Age as the Silver, but considering the disparity in material between the two, I'm a lot less conflicted about the former. I suspect given the dearth of '70s material, folks voted for potential more than execution. Bel Juz, Commander Blanx and the rest will have their day. Maybe. I dunno. You seven guys work on that.

Meanwhile, the six guys who dig on Diane Meade, Zook, Vulture and the rest are also alright with me. "Guys" is meant to be gender inclusive, BTW. I suspect you also appreciate possibilities over reality, or maybe you're just kitschy. Who am I kidding? We like the Manhunter from Mars. That theory applies to all six decades of his publishing history.

If I recall correctly, I was among the ten who favored the Iron Age. Seeing as it included JLI, American Secrets, and Christopher Priest on JLTF, how could I not? Maybe because it tied with the Modern Age, which was represented by Morrison and Waid JLA? Ah, but the rub is it also involved the only Ostrander series I've actually hated, Joe Kelly JLA, that business with the cone head, and Blackest Night?

Honestly though, these are all valid and enjoyable "eras," I think they're all super, and I hope to do a better job of serving them in the future. (Well, except the Bronze Age. I've only got a handful of posts I can ring out of the '70s, right?) I'm extremely pleased to have fans who span so many decades, and I offer every one of you a virtual reality Choco!
Posted by Diabolu Frank at 10:30 PM

A quick note, I kinda liked Joe Kelly JLA. Mahnke pencilling the Manhunter is awesome, and the Scorch love story/burning martians ideas were pretty awesome. Between the Oan and the New Gods backstory from Ostrander, I could see an awesome series around MM's cosmic adventures.

Mahnke was a treat on J'Onn, but Kelly wore me out early on with "The Golden Perfect" and "The Obsidian Age." I only skimmed half of his run, and it pained me, especially the Fernus stuff. Thankfully, I resolved that in my own mind by merging it with Claremont's "Scary Monsters," but no such luke with JLElite and that Plastic Bastard stuff...