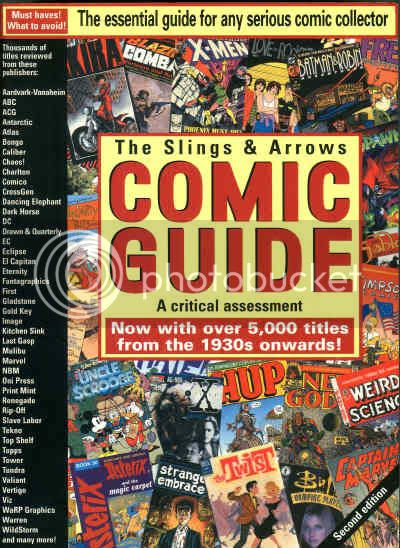 I recently picked up this incredible resource for comics criticism at Half Price Books, though at $14.95 I paid well less than the $39.95 MSRP, and it sells on Amazon for less than five bucks. Being an exhaustive tome, our J'Onn J'Onzz makes numerous appearances in the text, and I've tried to unearth all the best bits below...

Martian Manhunter arrived in 225, accidentally transported from Mars with an ever-increasing array of abilities initially subsumed by his assumed identity as a police officer. His stories became ever more outlandish, and his demise was hastened by the addition of irritating alien companion Zook in 311, but he lasted until 326 before being bumped to House of Mystery from 143. At least he had a tenuous link to the theme of the comic, though. What Aquaman, however nicely drawn by Nick Cardy, was doing in 293-300 is anyone's guess.

With 143 the comic changed direction abruptly as the Martian Manhunter transferred from back-up status in Detective, but Jack Miller's scripts and Joe Certa's art never manages to rise above mediocre. More fondly remembered was a second superhero strip, 'Robby Reed - Dial H For Hero', by Dave Wood and Jim Mooney, with Robby's ever-changing super-alter ego. Neither strip had much staying power, and when Joe Orlando became editor with 174 he wasted no time in booting the pair out.

By 1970 the title was failing to live up to its name, and drastic surgery came with 199, as Batman was evicted, giving Superman the chance to team with other characters... The best of a generally decent bunch, though, is 212's return of the Martian Manhunter. When last seen in Justice League of America 71 he'd left Earth to locate other survivors from his race, and this story followed on.

In 449-451 there was a Martian Manhunter strip written by Denny O'Neil, and nicely drawn by Mike Nasser and Terry Austin, that heralded the return of the character after an absence of many years.

DC: 37 issues 1993-1996
After the Zero Hour series, the Justice League was split into three titles, supposedly to represent different aspects of the 'Justice' in the title. Justice League Task Force began life as a UN police force, sent into trouble spots or assigned to investigate potentially dangerous organisations. J'onn J'onzz, the Martian Manhunter, provides the backbone. Little's been done with him for years and he links the team to the past. He's shown as a clever if manipulative leader, ideally suited to managing young heroes. The original premise creates a new group for each mission and the first story-line featured Nightwing, Flash and Aquaman... 7 and 8, written by Peter David, have an all-female team investigating a race of lost women. Bizarrely, J'onn J'onzz, as leader, feels compelled to become a woman for the duration of the mission! Around 16 the permanent team of Gypsy, The Ray and L-Ron/Despero start to coalesce. This issue ties into the other Justice League titles and introduces Triumph, an original League member who's been missing (and apparently forgotten) since the League's first adventure. The next issue provides a recurring villain in Vandal Savage, and by 21, with Christopher Priest writing, they're all in matching costumes doing traditional superhero team stuff. Up to this point Sal Velluto had provided a real sense of continuity through his artwork. Though the overall quality is dependent on the skill of his inkers, Velluto's style (somewhere between Gene Colan and George Perez) gives the series a distinctive look. However, from issue 25 Ramon Bernado takes over the art chores, with a style far too close to Sal Buscema's to have much merit of its own (even if you like Buscema). Later issues rely on traditional DC team plots: fights for leadership, members being tried for criminal activity. They even end up crossing over with Travis Morgan, The Warlord and having a 'land that time forgot' adventure in 34-36, at which point another revamp of the Justice League titles was announced, resulting in the title's cancellation.~NF Recommended: 7, 8

In 10 Josh Siegel produces a shrewed and non-mawkish exploration of the Martian Manhunter's difficulty in being accepted by Earthlings.

DC: 3 issue miniseries ('American Secrets') 1992, 4 issue ministries 1994, Special 1996, 38 issues (0-36, 1,000,000), 2 Annuals 1998-2001
Debuting in Detective 225, and running there for years, there's a case for Martian Manhunter being the start of the 1950s superhero revival. Despite this and being a founder member of all Justice League incarnations, he's always been a second-stringer. The problem was that he's a near-omnipotent alien with a fatal weakness (fire), and DC already have a far more popular near-omnipotent alien with a fatal weakness. Gerard Jones circumvents this for the first series by concentrating on the Manhunter's assumed identity: John Jones, Denver police officer. It's set soon after his arrival on Earth and the plot is a checklist of the 1950s in hindsight. Payola, quiz fixing, UFO scares, a pink Cadillac, Mad magazine, the fear of Communism, the new suburbs, Elvis Presley (or as near as his estate's lawyers will permit) and Leave it to Beaver are all thrown into the mix for a dark and atmospheric story lifted further by Eduardo Barreto's art. The succeeding series is dull stuff, as suppressed memories rise to the surface and, yawn, the Manhunter must confront his true identity. A spiritual quest also starts the poor 1996 Special, which soon degenerates into fights, but the 1997 JLA Annual has a good Martian Manhunter solo story, as does the 1989 Secret Origins 35.

The 1998 series begins with a disappointing issue 0 followed by a poorer 1,000,000 (which does reveal the final fate of Darkseid), but thereafter John Ostrander and Tom Mandrake hit the form that made their Spectre so intriguing. They establish that the Martian J'onn J'onzz maintains multiple identities, acting as a global protector, and for the first time since his introduction the parameters of his metamorphic and telepathic abilities are explored, finally differentiating him from Superman. Ostrander dips into various aspects of Manhunter's past, seamlessly integrating what might be seen as anomalous, makes sense of his previously capricious name, and Mandrake's moody pencils (until 33) maintain the essentially sombre character. He's given a new arch enemy in 0, used to good effect in 6-9, and Cameron Chase, late of her own title, provides fine occasional support. The beauty and appeal of the series, though, rests strongly with Ostrander, who possesses a rare ability to take any genre and have the Manhunter not only work within it, but seem at home. Furthermore, his scripts are always thought provoking, to the point where even a largely substandard teaming with the JSA in 18-19 still contains some worthwhile characterisation and a fine pay-off. 'Revelations' (20-24) begins with a gem as it explores the early interactions J'onn experienced with his superheroic counterparts, but thereafter even the Spectre in 23 disappoints. Renegade Martians recur to good effect in 25-27, after which John Jones is split from J'onn J'onzz in 29-31. It begins well, but other than setting up an excellent treatment of Jack Kirby's Apokolips characters in 33-35 it disappoints. The final issue is a trawl through the Manhunter's more recent history as the supporting cast is under threat. If the series had to end, this was an apt finale. ~FP

Interesting. I will have to check this book out -- I am curious as to what he has to say about the Winged Wonder given his checkered publishing history.

I think what these little summaries do a good job of demonstrating is that the Manhunter from Mars, due to his second stringer nature, has had to endure a lot of revamps over the years in order to identify the "real" or "definitive" version of the character. Unfortunately none of them have really stuck except, I would argue, his portrayl on the Justice League cartoon, which is (to this Assemblers fan) more akin to The Vision than Martian Manhunter. (Ironic, considering that whole Red Tornado thing.)

I hate to use a reference to Identity Crisis, but I still think J'Onn's greatest strength is that he is more butter pecan than chocolate; he's offbeat but appreciable. Ultimately when the character eventually (perhaps sooner rather than later?) comes back to rejoin the land of the living, I hope we can get some sort of streamlined version of him, keeping what works and jettisoning what doesn't work, and pushing that version into a niche which is not covered elsewhere. A "Bwa-ha-ha" style Superhero strip with him as the straight man could work, or perhaps a Weird Superhero style playing up the police procedural aspect.

But these are the same ideas I have been pushing for several years now.

Hopefully DC will stick with their current feature/"co-feature" format and give the Manhunter (Hawkman, Aquaman, Atom, et al) a place to hang out and get some new stories told.

I can send you scans. Short version: They liked Hawkworld best of all. Dug earlier Silver Age, lukewarm on Isabella, cool with Messner-Loebs and Johns.

I'll have to work the rest of my thoughts into future editorials. Definitely taking yours in...

Ironic how the author of these summaries praises American Secrets for focusing so tightly in on the John Jones persona and the claustrophobic atmosphere of 1950's paranoia...and a paragraph later go on praising Ostrander and Mandrake for becoming a global protector who "seems at home" in his series.

Well, the Ostrander series and American Secrets could NOT be further apart in differences. Why the praise for both?

The success of American Secrets was, I think, because of its narrow, deep focus, which allowed for a probing, noirish detective yarn. The Ostrander series was too broad and all over the board in terms of tone and genre to be effective, IMO.

I think the key to success to writing a "near-omnipotent alien with a fatal weakness" is to confine him as much as possible, not let him go all out. If the near-omnipotence is a problem, then put him in a setting where's he doesn't "seem at home." Put him back on Earth having to function among humans, not up in the Watchtower. Throw him off balance, let him struggle with his surroundings, add a dose of paranoia if need be, and above all, let the Martian be a detective. Make him use his brains, not his brawn. Too many people seem to have forgotten that J'onn was a detective first, then superhero.

So many writers don't seem what to do with him because he's too powerful and some have even complained about how they don't like writing J'onn. They just need to bring him back to his detective roots and I think writing him would be a lot easier.

The reviewer can praise the control exhibited by Gerard Jones in handling the noir of American Secrets, while still praising Ostrander's supposedly deft handling of J'Onn in several other genres, as well as his establishing that "the parameters of his metamorphic and telepathic abilities are explored." I totally disagree, and felt the usually reliable Ostrander was flailing wildly throughout his run, but I can see where the reviewer is coming from. He's just wrong is all.

For years I resisted a simple truth: the easiest way to deal with a near-omnipotent alien powerhouse is to give him a crippling weakness to one of the most commonly accessible elements on Earth. What separates Martian Manhunter from other heroes is his essential vulnerability, which forces him to innovate, and consistently shifts him into the underdog role. J'Onn has far more in common with Daredevil than the Silver Surfer, but too few writers make the connection.