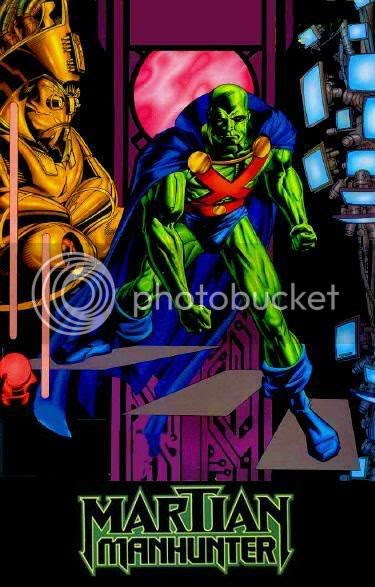 I usually enjoy the work CBR/Comics Should Be Good columnist Brian Cronin offers up, especially his weekly Comic Legends Revealed, but he's running a new feature this month concerning lists of the Top Five Most Iconic DC/Marvel Character's Covers that I find mighty disputable. For instance, his thirteenth spotlight shone on the Top Five Most Iconic Martian Manhunter Covers, and speaking as something of a fan (*AHEM*), it's Wizard Magazine caliber misguided.

Right off the bat, let's be honest now, Martian Manhunter is not an iconic character. Until the 1997 Grant Morrison JLA revival, he rarely even popped up in analogues for the Justice League. Luke of El Jacone's Comic Book Bunker and Being Carter Hall recently made the wise observation, "J'Onn's greatest strength is that he is more butter pecan than chocolate; he's offbeat but appreciable." So we've got an essentially anti-iconic character who, outside of Justice League stuff, tends to appear in little-read obscurities when he appears in a book at all. Pretty tough to make a case for any "iconic" covers, I'd figure.

Per Cronin's criteria, the iconic status is "determined mostly subjectively by what covers are called to mind when one thinks of Martian Manhunter, but first being determined with a prominent objective standard of whether a cover is homaged a lot or featured a lot in histories of the character). The notable exception is no covers from a character's first appearance (which isn't applicable to all characters, of course, just those who appeared on the cover of the comic they debuted in)!"

His choices: Now, these are all nice covers, but with the possible exception of two are hardly "iconic" by any measure. The HoM cover was chosen pretty much at random to represent Joe Certa, and because it didn't feature the "idiotic" Zook. Regardless of it being the debut cover of his third ongoing series (Detective and HoM both count as ongoing, so an "eponymous" disclaimer is necessary,) I hardly ever see the zero issue anywhere, and it virtually never comes to my mind (and I've thought about J'Onn J'Onzz most every day since 1999.) Cronin actually references DC Comics Presents #28 as a contender, then awards an entirely random Starlin JLofA cover the top spot. The argument could be made this was Manhunter's first mano-a-mano with Despero, but they'd already fought twice before, and the story was fairly middling. Only the oft-seen JLA #13 headshot and the first ever "team-up" issue of TB&TB could really rate as billed.

Now you may say to yourself, "hey, this was a challenging list to make, and easy to tear down. How would you have done better?" I'm glad you asked, as, based on Brian's criteria and disqualifying all of his choices, I'll offer my own briefly considered top ten alternatives...

Honorable Mentions:
Martian Manhunter Special #1 by Howard Porter
Not heavily circulated, but Porter's first pass in his JLA style, and memorable.
The Brave and The Bold #56 by Bernard Baily
The second Manhunter team-up, and a very striking cover.

10: DC Comics Presents # 27 by Jim Starlin
A great cover to a book that introduced a lot of people to J'Onn in the 1980s after several years out of print, and the second fight with Superman. Speaks to J'Onn's overwhelming vulnerability despite his might, and his established role as jobber of the JLA. Good story, too.

9: House of Mystery # 143 by Joe Certa
The first ever cover solo-starring the Manhunter from Mars, and a great shot of Zook, his sidekick through most of the 1960s.

8: Justice League of America # 230 by Chuck Patton & Dick Giordano
Featured in a couple of DC house ads in 1984 and one of the most dynamic Martian Manhunter covers ever.

7: Justice League of America # 71 by Dick Dillin & Syd Shores
A holy grail issue, featuring the extinction of Mars, the first appearance of Commander Blanx, and the start of our hero's decade-plus exile from Earth/regular publication.

6: The Brave and The Bold # 28 by Mike Sekowsky
One of the best known and most imitated covers of all time, and through his role as a founding member of the JLofA, J'onn J'onzz solidified his place in DC history. Loses points for Manhunter's lack of prominence, but remember, this was his first ever appearance on a U.S. cover.

5: Justice League of America # 228 by Chuck Patton & Dick Giordano
Martian Manhunter's striking return to Earth, the League, and regular publication. Heralded the infamous Detroit era and the end of his Bronze Age existence.

4: Justice League America # 1 by Kevin Maguire and Terry Austin
Among the most imitated covers of all time, and assured Martian Manhunter's association with the JLI forever. Even his being minimized and off-center offers insight into the character's treatment for most of his existence.

3: World's Finest Comics # 212 by Nick Cardy
A classic and favorite of most every Martian Manhunter fan with memories of the 1970s. A key Bronze Age issue introducing Mars II, Bel Juz, and the character's decade long status quo. Revenge for every slight the character has ever been served. Best. Tagline. Ever!

2: JLA #1 by Howard Porter and John Dell
If not for this book, there's a good chance we wouldn't be having this discussion, as J'Onn likely would be sharing space with forgotten also-rans of the '80s. More modern MM fans were created by this book than any other.

1: Martian Manhunter # 24 by Tom Mandrake
Probably the single most beloved J'Onn J'Onzz cover of his entire existence. Crystallizes the difference between Manhunter and every other major DC super-hero. All the favored elements are there: slope brow... definitive costume... association with lesser lights... the cookies... the combination of awesome power, droll humor, and vulnerability. The only thing missing is tragedy, and yet, if you really try, you can project that on their as well.

Not necessarily my favorite covers (by a long shot,) but all seventeen combined should encompass pretty much every cover that could legitimately be designated iconic. Thanks to Comicvine for all those image, and I welcome your thoughts...
Posted by Diabolu Frank at 7:00 PM

I'll have to check on specifics, but one cover that immediately sprang to mind was the Brian Bolland-drawn cover for "Animal Man". Like I said, I'll have to check on it to see if it's as iconic as I remember, but the combination of humor and spookiness (on J'onn part) still comes to mind easily. Otherwise I agree with you on your choices.

I love that cover, and it's one of many that would make a "favorites" list, but I don't think it's "iconic" as Cronin defines it... just "awesome" as I define it!

All excellent choices. Of course, the JLI cover...why didn't Cronin think of that? And MM #24. I just re-read that issue the other day for my J'onn/Blue Beetle/Booster fix. The only one on your list that I'm not crazy about is the JLA #1 and that's only becuase I take issue with the coloring of that entire series. Way too dingy and it always bugged me.

Okay, here's two that I like, that aren't really iconic, but just personal favorites.

Here's something that expresses tragedy (and it's from the little-kid's book):

I feel silly saying it, but I liked the story and I generally like comics written for kids evey though I'm way beyond that age-wise! :)

Another personal favorite of mine:

Nice and dynamic and simple. Plus J'onn clutching his head = always makes a dramatic cover. If I remember correctly, I rather liked the story, too.

I much prefer the original coloring for the cover of JLA #1, with the bright red background and the more plainly visible planet Mars. They felt it was a "spoiler," and turned everything green. I really should dig up the red version for this blog.

I prefer the Justice League Unlimited #24, with J'Onn brought to his knees by the "blood wings." Adventures in the DC Universe # 1 was also nice. Iconic? Nah.

Cronin's lists of so-called "iconic" covers have been questionable at best. I thought his Martian Manhunter feature was weak and I'm not even a hardcore like you are.

JLA #228 was the first cover I thought of. J'Onn looks great, and him going to town on Aquaman is very memorable. #230 was also one I thought of, though not as quickly as the other.

House of Mystery #143 is probably what I would consider the "most iconic" cover, as it really sums up what the Martian Manhunter was in the day, although the Choco/Oreo one has to be a close second.

Another I would add would be JLA Classified #45, by Walt Simonson. That was my favorite cover from 2007!

Dude! Another vote for JLA:C #45! I really should have read that arc, huh?

Yeah, I checked out a few more of the "iconic" lists, and as much as I usually like Cronin, he had me feeling like I was Rush Limbaugh to his Obama. I'm deeply uncomfortable with that.

Whew! It got busy yesterday so I didn't get this far, but let me say you were completely accurate regarding his cover choices. I much prefer yours. The only addition I might make would be issue 36 of the ongoing. Along with all the 'In My Life' covers, some of Mandrake's best work.

Not a bad cover, but once you hit the next-to-last issue of a little read series, "iconic" is a serious stretch. Methinks a plain 'ol "favorite covers" countdown may be in order for the future...