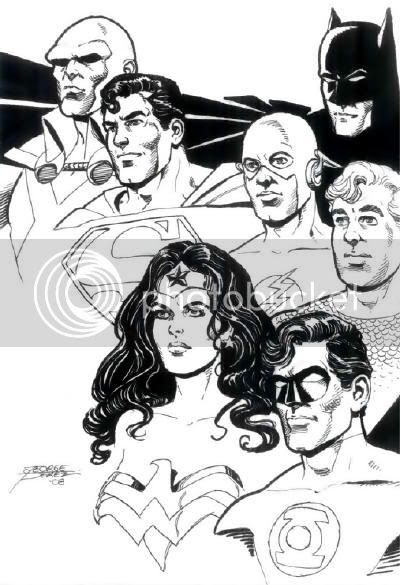 I miss George Pérez. No--no... even though Games has been delayed yet again, he'll recover from surgery and be fine. What I mean is, remember when Garcia-Lopez replaced Perez on Titans, because he was the only other guy who could draw perfectly idealized modern super-heroes with the same facility? I miss that Pérez.

Since the '90s, George has really taken to photo-referencing, which explains why Aquaman looks like ate a fish he's allergic to, and why Hal Jordan seems to be off his Proactiv®. Flash is kinda "ethnic," Wonder Woman resembles Sigourney Weaver, and Superman's got a Wayne Boring thing going on. Only Batman and Martian Manhunter are still appear on model, not that Pérez has ever drawn a bad J'Onn J'Onzz. I like this piece, but as with Alex Ross, it feels less like I'm seeing iconic super-heroes than a cast photo of the actors playing them on television.
Posted by Diabolu Frank at 12:00 AM

Weird, had I not been told that was Perez I might not have recognized it. Well, artists styles do tend to change over time, and sometimes you're with them as they break it down to theory, sometimes not so much.