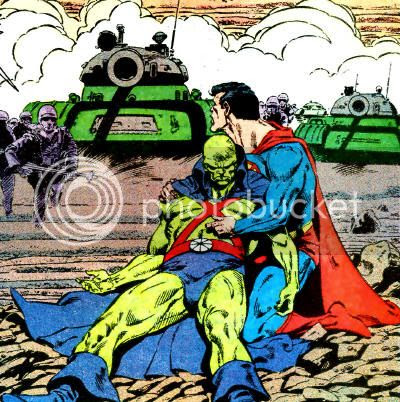 I used to gripe a lot about Superman on my old Martian Manhunter: The Rock of the JLA website. The main reason for this was that Martian Manhunter was often treated as Superman's whipping boy, or was used to bolster Supes in other ways.

For example, there's was "Red Glass" by James D.Hudnall and Ed Hannigan, with Willie Blyberg on inks. The same creative crossed the story over all of Superman's titles that month, and sent Supes into a parallel universe where he had turned out evil, concluding with the ominously numbered Action Comics #666. This Superman was believed to have crippled, then murdered Lois Lane. While our Superman pleaded his innocence, Jimmy Olsen and Lex Luthor tried to execute him via kryptonite exposure.

Instead, Superman woke up after having leveled Metropolis. Booster Gold was found under the Daily Planet globe, living just long enough to point out Superman as his killer. Superman's emotional stability shaky, he began looking for survivors, and found what appeared to be the skeleton of a Rastafarian. Big Blue was suddenly under the power-ringed "thumb" of Green Lantern Guy Gardner, who uncharacteristically wanted to share. "Hurry up and kill him before he gets free! I'd hate to have to hog all the glory myself!" The rasta turned out to be J'Onn J'Onzz in disguise, who said, "You mean you're afraid of him like everyone else. It's okay, Guy. I understand. I just wish there could have been another way, Superman-- but this is for your own good."

As the Alien Atlas drew back his arm for a nasty punch, he instead received one, and was left on his knees recovering. Superman was happy to see anyone from the Justice League, and Guy thought Big Blue was amnesiac. "Don't let him fool you! That's how he tricked Booster into letting down his guard!" Gardner heeded Manhunter's warning, and ringed up a dinosaur to eat Superman. The Man of Steel eventually broke free, then snapped Guy's mind in a battle of wills. Martian Manhunter swooped up to catch Guy's limp body, then laid his deceased friend on the ground. "By the moons! He killed another one!"

"I'm tired, J'Onzz-- or whoever you are-- tired of asking questions!" Superman sucker punched Manhunter from behind as he was laying down his fallen comrade, and the assault didn't stop there. The Man of Steel kept dealing damage and demanding answers. "Uhhhh...No. W-Wait..." J'Onn pleaded as Superman slammed into him again. "You can't make me think I'm responsible for any of this without proof!", Superman screamed, neglecting Guy's corpse. J'Onn moaned, "Trapped... moon... Red... *KOFF* Red Glassss...*" before dying himself. "J'Onn...? I didn't mean to hit you so hard. Wake up. Please, J'Onn...J'ONN!!" Superman finally began to accept the truth of his killing spree, just as the military arrived to take him down. It all turned out to be an hallucination in the end, of course...
Posted by Diabolu Frank at 12:00 AM

Wasn't there a similar story more recently, where Superman supposedly went on a killing spree only to find out later it was a dream?

They're always doing that. It's a way of showing everyone who's boss without ruining Superman's good name. Maybe it was Superman #666 last time?

I think your thinking of Sacrifice, which wasn't a dream, but was giving a Supe's a pass via mindcontrol. All these lack verisimilitude.

Superman can be the toughest (it's kind of his thing) but there are still fights he should automatically win. Especially vs. Martian Manhunter or a Green Lantern.

I am tired of perfectly good characters like J'Onn being made to look weak just to support the big money makers. J'Onn should be at or near Kal-El's level of power. DC is at risk of getting "Super Duper Pooper" Man, to borrow a phrase from Richard Pryor. Sometimes, I think that having a few equals would put things into perspective. (Of course, some things some characters can do better than others. There was a period when Superman was faster than the Flash, and better than every other DC hero in their specialty.)

All true, Will. Captain Atom's another guy who should be a real contender against Superman.

Yes, and I think one way to handle things is to just put some of the heroes in the "Any Given Sunday" category --- where on some days, Captain Atom, J'Onn and a few others can beat the Man of Steel or equal. Kal-El has stated that J'Onn is one of the few beings he would be afraid to fight. So, should Captain Atom, but writers seem to do weird things to support their characters -- regardless of power level or history. (In JLA/Avengers, there is a seen of HAWKEYE having used a lead foil arrow to pin Captain Atom to a billboard in Smallville with a lead foil arrow designed to take out Radioactive Man! Sorry, I don't think that would happen and that Hawkeye would be glad that Captain Atom did not disarm him by starting with the elbows. If it was Doctor Manhattan, however ....)

Sorry, I tend to like a few things called logic, commonsense and consistency in stories.