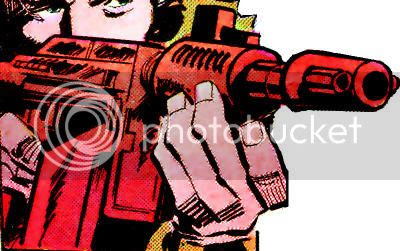 "Krypt-Kicker" was the code-name for a rifle developed by the Central Intelligence Agency in the eventuality that Superman or other Kryptoneans should ever threaten national security. Believed at the time to be the most powerful handheld weapon ever invented, the Krypt-Kicker was designed to be potent enough to stop any super-powered alien dead. The Krypt-Kicker was stolen from the C.I.A.'s secret arsenal by rogue agent Charles Brigham Dade, and wielded against the Man of Steel himself. One blast dropped Superman to his knees, leaving him immobile for several hours. His head "clear of pain," Superman collected himself, and presumably the confiscated Krypt-Kicker. Whether the C.I.A. ever reclaimed the weapon or expanded on their prototype is unknown.