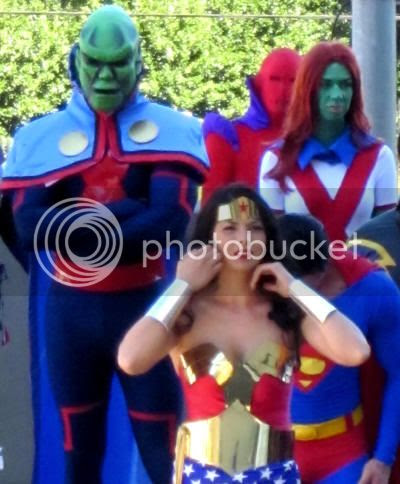 I've been struggling to put together a Coneheadhunter spotlight post, but I hadn't realized there weren't any unobstructed full body shots of the character amongst the oodles of photographs taken by Shag Matthews of Once Upon A Geek at Dragon*Con 2010. Further, I've been planning a one-off return of M'gann M'orzz's Miss Martian Monday, of whom there's a few solid shots, but probably not enough to warrant their own post. Also, a big part of the trick was finding pictures of one that didn't prominently feature the other, or the Classic Martian Manhunter cosplayer. I've decided to stop fighting it and let the whole Alien Atlas Family roll out together. However, as you can see above, the newer additions make for something of an odd couple.

Our Miss Martian costume player looks just as cheerful as the real thing. The suit plays great, with fine details like the "seashell" variation on the "pie" belt buckle. The green make-up is a bit dark for the girl's natural complexion/features, but she had to match the arms and leggings of the costume, so that's understandable. 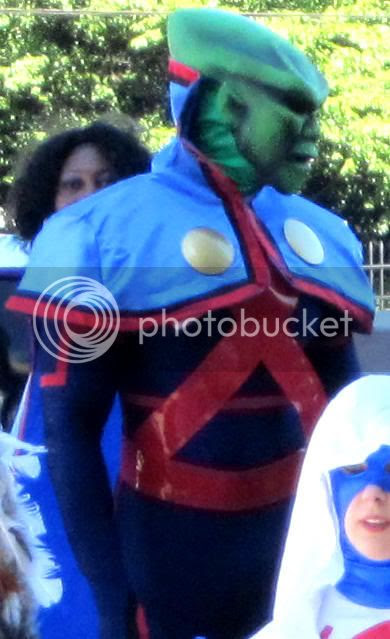 Mr. Martian's cone head is in full effect, as evidenced by this profile. J'Onn J'Onzz took on the look after Black Adam caused him to lose faith in humanity after World War III. He remained like this until his murder during Final Crisis, and variations appeared in animation and merchandising. I like the suit in print and here, but that head/mask remains a bone of contention. 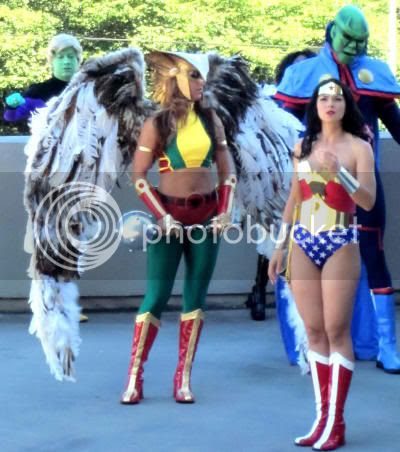 The trauma of World War III doesn't appear to have cost the Manhunter from Mars his interest in human fanny, though. For shame! Vril Dox is still a teenager, but you have no excuse!

Shag has taken his photos and employed them in a journal at the link below, so I suggest everyone give that a read. Also, there's some more new cosplay blogging to follow-up on, both with Shag's pics and new stuff dug up elsewhere...

I like how even if she's just fixing her hair, that Wonder Woman looks so regal. She's got gorgeous hair.