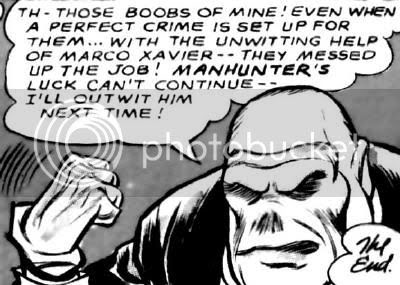 While researching a post for DC Bloodlines, I stumbled upon an edition of Robby Reed's Dial B For Blog which covered a fun list of Thirteen Shock-Ending Stories! Not one for spoilers, Robby would write the set-up for the big twist, but the reader was responsible for moving their mouse over a concealed image for the actual reveal. I don't believe the list was a countdown, but in the twelfth spot was "So You're Faceless!" I've made a point of not showing the actual panel on this blog, since the identity of Mr. V proved a cute if irrational surprise closing to Martian Manhunter's Silver Age solo series. Swing over to his blog for the pic, and you can also read my full synopsis of House of Mystery #173 (March-April, 1968) if you like.
Posted by Diabolu Frank at 12:00 AM