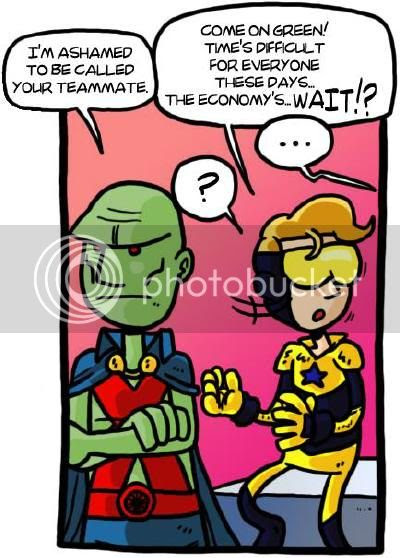 *Phew* Yet another week of scholastic battering. Since Lissbirds was kind enough to provide this week's Direct Currents at DC Bloodlines, all I had to do today was the Idol-Head, and I've still put that off all day. However, Liss found an online comic strip which featured the Martian Manhunter for that linklist, so she's pretty much responsible for this blog today, as well.

ARCHERS! is a strip based on the early days of the Dynamic Duo Bowman Brace (?) of Green Arrow and Speedy produced by Eyz. Martian Manhunter guest-starred in the most recent edition. J'Onn J'Onzz also co-stars in SUPERBUDDIES!, a strip featuring heroes formerly known as members of Justice League International. Below is a linklist of editions of each with the Cookiemonger from Mars...

Also, why not check out LissBirds primary gig as writer of the grand Comics Make Me Happy!
Posted by Diabolu Frank at 11:59 PM

My favorite one is SuperBuddies #4 where J'onn is endorsing Oreos. :) And now Hal Jordan and The Flash have their own Hostess snack cakes, so maybe there's still hope for some sort of recognition from the good folks at Nabisco. J'Oreos, anyone?

Thanks for the shout-out, too!

Oh, I didn't knew about this lil' spotlight I had over here!
Thank you!