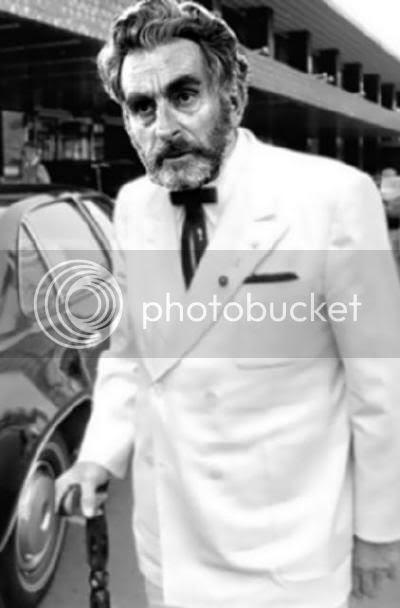 The scene began with an interior shot of a bank. From outside, a horn blared, and bank patrons began to scatter. An armored vehicle smashed through the exterior windows into furnishings within, tearing through counters like cheap plywood. The vehicle came to a stop directly in front of the vault. The cow puncher at the front of the broad contraption split in half, revealing a large drill within its hollow. Sparks flew and smoke obscured the view, until the vantage point switched to the inside of the penetrated vault. Thugs wielding tommy guns exited from both sides of the vehicle to control the crowd, while a well dressed mastermind stepped out to survey the scene. The Getaway King was pleased with the crackerjack precision on display, as he directed some of his men to begin loading moneybags into the armored vehicle. In no time, the dirty deed was done, and everyone filed back into the vehicle, which pulled out the way it had came.

Police cars immediately gave chase, when the vehicle suddenly split into three heavily shielded three-wheelers veering in different directions. The police cars in pursuit also divided up, but the two side getaway cars proved to have too much horsepower for officers to keep up. The central portion was heavier and slower, until the drill at its front tilted upward and launched into the air. The drill landed in front of a police car, too near to dodge, and acted as a ramp that sent the pursuing vehicle off to one side before landing upside down in the street. The discharged drill and downed police car served as an effective barricade.

Lieutenant Saunders arrived at the scene of the crime, and spotted a uniformed female officer. "Pretty policewoman Diane Meade... what are you doing here?" Meade had been sent to interview witnesses and try to work up a sketch of the criminal mastermind. Saunders dismissed the latter concern, assuring Meade that this was clearly the work of Monty Moran (Jeff Corey.) Both officers were surprised when tall dark Detective John Jones also showed up. "Aren't you supposed to be on your own side of town, Jones?" The Detective had been asked to take on the case by Captain Harding, who recognized that the usual procedure wasn't going to be enough to capture the Getaway King. Saunders scoffed at the premise that Jones brought anything more to the table than his own people, but graciously allowed Jones to proceed with his investigation.

Detective Jones took a long hard look at the floor of the bank, then began to wander off into the street. Lt. Saunders wondered aloud mockingly if Jones was part Cherokee, but Meade followed the detective to ask what he was up to. Jones explained that the armored vehicle had distinct tire treads, and even after the contraption split, each section was still heavy enough and moved fast enough to leave unique skid marks along their route. Policewoman Meade thought that a vehicle that bizarre would need specialized parts to be manufactured, and Jones encouraged her to follow up on that hunch while he continued to trace the skids on foot with his heightened Martian Vision.

Monty Moran joined his men at their safehouse, congratulating them on a job well done. The goons began to unload the portion of the haul from Moran's vehicle, but a pair picked up their machine guns and pointed them at the boss. When Moran demanded to know what they were thinking with this betrayal, he was reminded that he had been warned not to pull any heists without the approval of Vulture. A deep, chastising voice boomed behind Moran, who turned to find a large man with no discernible face. Moran begged the forgiveness of Mr. V, who expressed his disappointment at seeing such mastermind material go to waste. However, there was no mercy in Mr. V's heart, and no escape for the Getaway King, who cursed "Faceless."

John Jones had made excellent time in reaching the remote hideout just before dark, but he was still too late to save Monty Moran. The marvelous vehicle and the loot were long gone, with only the body of the genius left behind. Before he passed, Moran wrote the letter "V" in his own blood...
Posted by Diabolu Frank at 12:00 AM

Colonel Sanders! I didn't know you had a checkered past as a criminal!!

Nice to see Mr. V make an appearance, too. I wonder who's going to find Moran?

That was a relatively quick and painless mock-up. I pretty much grabbed the first good-sized Colonel Sanders picture that would work, which happened to be a side-by-side comparison of the same picture with another guy's slightly oversized mug pasted in. I thought for sure I could just find an unaltered Jeff Corey western pic that would do, but there aren't that many online, so off came his head from a Star Trek appearance.