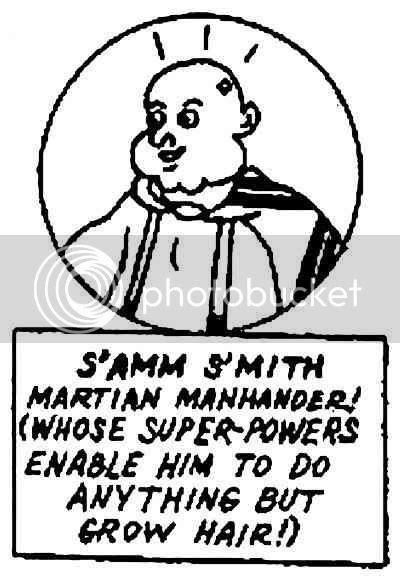 The Silver Age Comics blog offered a post last week about the origins of Alter Ego. Jerry Bails' and Roy Thomas' fanzine, aided and endorsed by Julie Schwartz, was pretty much the birthplace of the comic book enthusiast community. Conventions, the direct market... hell, blogs like this all came from Alter Ego. Both Bails and Thomas were collectors of '40s & '50s comics in general, with a special fixation on the long underwear crowd, so they were eager to support "The Second Heroic Age of Comics" that Schwartz was ushering in. This may account for how heavily the fanzine skewed DC, with articles on the Spectre, Wonder Woman and the Wizard, as well as advertising bullets for upcoming National product. The cover feature was Roy Thomas' "Bestest League of America," a parody feature of the Justice League of America. Among the heroes was S'amm S'mith, the Martian Manhandler, "whose super-powers enable him to do anything but grow hair!"

Alter Ego eked out ten issues through 1969 (a dividing year between the Silver and Bronze Ages, when the real Martian Manhunter fell into limbo.) In the meantime, Roy Thomas became a writer/editor at Marvel Comics, while Jerry Bails began Who's Who of American Comic Books. In 1978, an eleventh issue saw print, and a few years later, Roy Thomas moved to DC. Thomas wrote Martian Manhunter into a script or two before returning to Marvel in the late '80s. Thomas revived Alter Ego at Twomorrows Publishing in 1997, and the now professional magazine is still being produced.

Again, for more, check out the Silver Age Comics blog!
Posted by Diabolu Frank at 12:16 AM

"whose super-powers enable him to do anything but grow hair!" Is it sad that I think this is really, really funny?

Nice to see a blog all about the Silver Age! I'm going to have to go check that out...