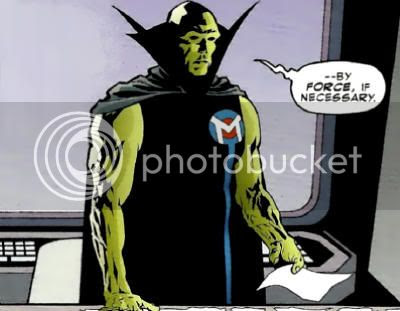 In anticipation of an inexpensive reprint edition coming soon, I thought I would dig out the write-up I did for the hardcover edition of the Elseworld Son of Superman in 1999 (available in softcover a year later.) This was originally on my old site, Martian Manhunter: The Rock of the JLA. I've edited it somewhat, but this is basically my impression of the book at that time.

This Howard Chaykin story revolves around the emergence of teenager Jon Kent as a metahuman, years after the disappearance of his famous father. The Justice League is still around, dressed in matching black uniforms and lead by the Martian Manhunter. Also around are The Supermen, a terrorist group lead by Pete Ross and Lana Lang, who kidnap Jon. Together, they break Superman out of a government facility run by a grizzled cowboy named Macavoy. What they don't know, even though it's highly predictable, is that Lex Luthor was controlling the project from behind the scenes. What you really don't see coming is the revelation that Macavoy is the Manhunter in disguise, pulling the strings for Lex in the JLA. After some investigating, Batman learns Wonder Woman has been helping to bankroll the Supermen, then refuses to take part in a manhunt when Supes is framed. 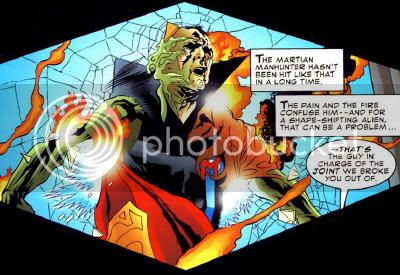 Supes, his son, Bats, and WW respond to J'Onn's charges with their belief in a conspiracy masterminded by Luthor. The Manhunter believes that's for a court to decide. WW throws the first punch of many, leading to a dialogue between Supes and J'Onn.
"You and I are merely visitors on this planet."
"That's where you're wrong. J'Onn. You're a visitor--I'm an adopted son."

MM is stunned by one of Supes' blows, which knocks him into an electric sign, which causes him to shapeshift into Macavoy. He then claims he betrayed Superman to keep him from being assassinated. It also allowed him to keep order, with his federally funded JLA. Thanks to Superman, the League ends up disbanded. Wonder Woman has diplomatic immunity, but J'Onn J'Onzz is deported bck to Mars for his part in the scandal.

As with "Justice Riders", the best part of this Elseworlds is J.H.Williams III's artwork. He's becoming quite the unsung hero of that line.

Once again, another story where J'Onn was treated shabbily to make the Man of Steel look good. I doubt that there would be a sequal, but one where Superman needs J'Onn's help might feature the Manhunter from Mars telling the Metropolis Marvel to pound sand. (Actually, that is my message to too many writers who have little understanding of character motives and history.)