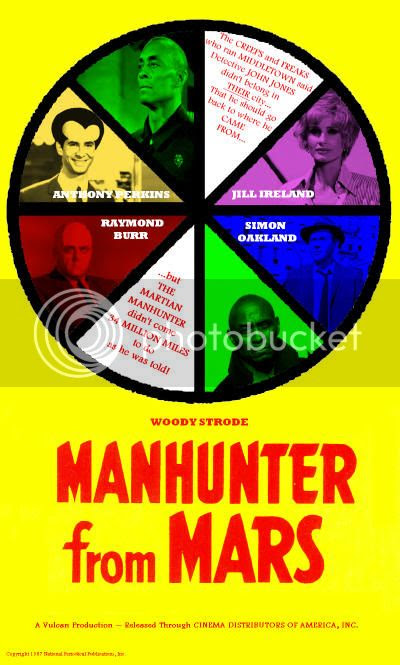 While we wait for the continuation of the new Middletown TV series after it's pilot sneak preview episode last week, I thought we would take a moment to look back on a major influence on the production: the brief spark of "Martian Mania" in the late 1960s.

Everyone remembers the sensation that was the Batman TV show, launched on January 12, 1966. The "Batmania" that followed was likely the salvation of the faltering American Broadcasting Company, not to mention the Batman comic line. Batman merchandise was everywhere, a feature film was in the works, and everybody started looking for their own pot of gold. Tons of other DC characters soon stepped in line for their turn in the spotlight, with Superman heading to Broadway, Wonder Woman beginning the slow trek to her own TV show, and so on.

Meanwhile, former Batman family editor Jack Schiff was dismayed to see his lost franchise blossom so fruitfully without him. With his position at DC less than secure and his health in decline, Schiff began looking for some kind of salvation. Schiff approached freelance writer Arnold Drake, who had ties to the film industry through some screenwriting work, about the possibility of licensing a property under his stewardship. Drake did Schiff the favor of making a few phone calls, and a producer took a nibble. Adam Benson, a former U.S. Navy Commander who would later gain fame through his association with the Columbo TV series, took an interest in the Manhunter from Mars series. Benson shopped the heavily discounted property around for months, until it finally found a home late in 1966 at Vulcan Productions Inc. Arnold Drake had written the drive-in favorite The Flesh Eaters for the company in 1964, and was tapped for the first draft. Since the "camp" that defined the Batman series was not his strong suit, Drake enlisted the help of fellow comic writer Bob Haney in the endeavor. They turned in their draft before Christmas, and pre-production began the first week of 1967.

Batman rip-offs Mister Terrific and Captain Nice debuted the following week on the same night at rival networks. They were canceled within a week of one another that May. Batman was shedding adult viewers in droves, and The Green Hornet failed in its mission to appeal to those older fans. Vulcan had meanwhile already signed Raymond Burr and Anthony Perkins as guest villains in anticipation of a full roster of celebrity cameos, as well as begun costuming and effects work. Caught between a rock and a hard place, Vulcan had to decide whether to throw away good money after bad as the super-hero craze was rapidly cooling. Vulcan chose to proceed, but they tossed out the original comedic script and ordered a more serious science fiction take from Arnold Drake, with an eye toward economy on a tightening budget. Producer Adam Benson had always thought athlete-turned-actor Woody Strode would be a perfect choice to play the Martian Manhunter, and circumstances had changed such as to allow an African-American to be cast in the lead.

Manhunter from Mars began shooting on April 1, 1967, wrapped later that month, and began its "traveling" release the second week of September. The film proved a cult hit, which came as a bit of a surprise to DC Comics, who had already decided to discontinue the Manhunter from Mars strip in House of Mystery effective in early 1968. Instead, DC was spurred to cobble together John Jones: Manhunter From Mars #100 before the release of the sequel that winter. Surely, Manhunter from Mars' small but loyal fan base factored into John Jones getting the nod for the Smallville spin-off, and we got a swell couple of admittedly small scale movies besides. More on that next week...
Posted by Diabolu Frank at 12:03 AM

The pie-shape design, the garish colors, the copy written by some middle-aged guy trying to be hip... everything says low-budget sci-fi drive-in movie from 1967. Perfect. And matched by a well-researched text article. You should have saved this for April 1st, but I'm so glad you didn't. Please tell us more about this movie. This sounds so much more fun than that stupid CW show.

How many movies were there? Do you have the plot synopses for all of them?

It's a heck of a lot easier to play around with a '60s aesthetic using rudimentary programs than to attempt a "Smallville" gag, lemmetellya.

Tom, there were two movies roughly a year apart. A felt bad making Woody Strode work so hard into the decade, given that the dude was at the Berlin Olympics. He still kept up his physique, though. I've got the skeleton of the first film in mind, with the plot to be laid down weekly through actor spotlight posts. I'm much fuzzier on the sequel, but the raw material of the "leftover" photos/art/characters lends itself to a more science-fantasy approach.

If you like, I could do some research of my own. I might uncover some information about the sequel, and possibly an aborted attempt at a third film.

Go to town, Tom! I'll shoot you an email with some of the sequel "casting" done so far...

Woody Strode as J'onn Jon'zz is masterful casting! I wish I could have seen it...