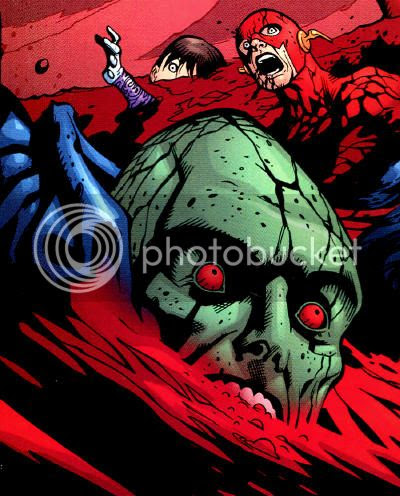 Superman had a terrifying vision of Lex Luthor initiating aggression again the nation of Qurac as a high critical parallel to U.S. President George W. Bush’s invasion of Iraq; ending in death and destruction. The whole thing was generated in Superman’s mind by a device of the Martian Manhunter’s, something like a telepathic virtual reality generator, which was employed outside J'Onzz's supervision.

Wonder Woman called J'Onn afterward to explain the damage the Man of Steel had caused through his spastic reaction to the nightmare. “He said you owe him a new 'Transconsciousness Articulator' ...and that Chocos will help the headache, but not to touch his private stash in the commissary. He also said you were lucky. Forcing your conscious mind into the realm of your subconscious without a telepath to help maintain balance can be very dangerous.” Superman noted that J’Onn had used his invention to help Kal unburden his mind of anxieties in the past.

"American Nightmare" was by Joe Kelly, Chris Cross & Tom Nguyen. For a more detailed look at Wonder Woman's role in this here, check out my coverage at the Diana Prince Blog.
Posted by Diabolu Frank at 12:00 AM