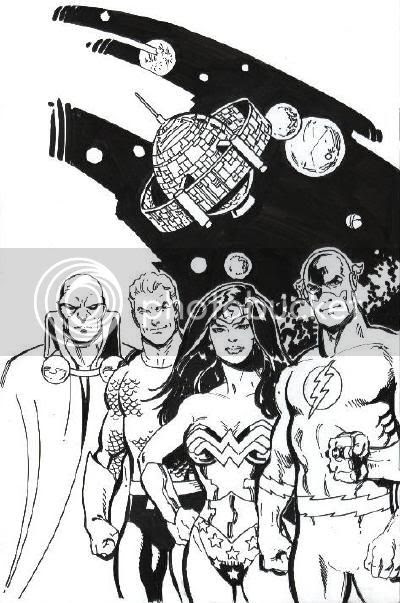 Martian Manhunter, Aquaman, Wonder Woman, the Flash, Green Lantern, Batman and Superman; all under the watchful of the the JLA Satellite!

You might also want to scope out Justin Norman (Moritat) doing the same characters in flight, plus Green Arrow. The teensy wittle J'Onn J'Onzz seemed to be an afterthought...

Special thanks to Firestorm Fan for the notice!
Posted by Diabolu Frank at 9:00 AM

With the new JL Doom movie that recently came out, do you think Malefic will enter into any more comics now. I'm hoping that now that other people have seen who he his he may appear in some comics again. Also do you know with all of the DC animations that have been done, is MM suppose to get one anytime soon. If so, I hope they do a Ostrander/Mandrake MM with the whole malefic fight and plague instead of the secret origins one justice league did.

I'm not sure that there's a direct correlation between cartoon and comic appearances. However, history has shown that linking characters in cartoons tends to strengthen their ties over time. You can be fairly certain there's a living New 52 Malefic, and he'll turn up the next time someone needs a Manhunter-specific foe.

I'm confident that there is no Martian Manhunter solo cartoon in the works. We'll be lucky if he continues to appear as part of the Justice League. "Doom" may well be his last hurrah outside of Young Justice. I'd love an American Secrets cartoon, or something wacky like "Valley of the Dahls."