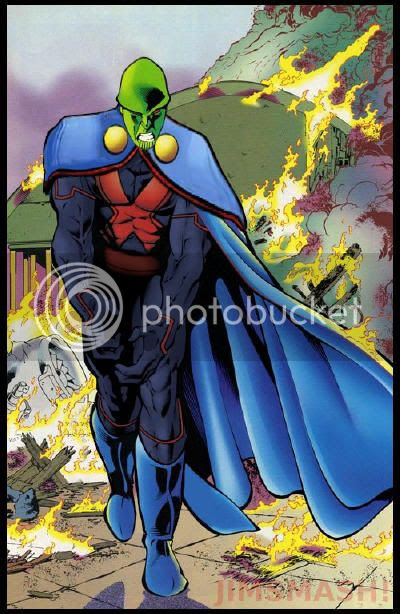 My second greatest DC New 52 pet peeve* is that seven months in, we still haven't seen a Martian Manhunter design sketch, or even a credit to the artist responsible for the reworking. I actually like it and have generally positive things to say about it (for once,) but a year in, DC just keeps spitting up godawful Jim Lee costumes that are as out of touch as anything in Nightwing's closet. Anyway, I suspect blogger Jim Smash!!! had similar frustration over José Ladrönn's Martian Manhunter redesign following Infinite Crisis in 2006. Six years later, and I've yet to see any of Ladrönn's actual art for the project, with web searches triggering an echo effect back to this blog's previous requests to see said art. Al Barrionuevo's art on the mini-series that featured it favored squat, skinny panels and obscuring angles that rarely showcased the design clearly, and other artists tended to tweak the design in books as it suited them. In 2008, Jim was driven to take one of my favorite Martian Manhunter images, a Jeff Johnson splash from 1996's Justice League: A Midsummer's Nightmare #2 and work it over in Photoshop with the "Coneheadhunter" suit. The result is pretty freakin' sweet, and I echo Jim's sentiment about how we should have gotten Johnson on a solo series after this! Say Jim-- you ever consider doing this again, DCnÜ stylee?

*After "Why is Wonder Woman running around with a sword, chopping people up?" Then again, that's been a problem since before any of us ever heard of Dan Didio.
Posted by Diabolu Frank at 1:32 AM

J'Onn's new costume actually evokes a few different cultures. The lower part of it reminds me of a dhoti from India or a kilt in a few angles. I like it better than the redesign that many labeled the Conehead Hunter.

It would be nice to see people get some credit for their work. (In the case of Midnighter's spikey outfit, maybe it is better not to know.)