The Vile Menagerie: THE DREADED GENERAL 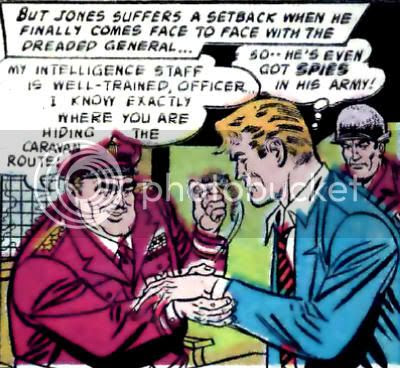 History:
The mysterious General, through unrevealed means, hand-picked a troop of men and outfitted them to act as a unique criminal military force. Employing weapons smuggled into the country, the plundering platoon organized itself along military lines for profit. The little criminal corps' first recorded heist involved robbing a vault with the aid of a tank. The crime force next looted the payroll of Apex Paint, but the crook-soldiers involved were arrested with the covert assistance of the Manhunter from Mars. The General had many other highly trained units, allowing his uniformed gangmen to besiege Middletown, U.S.A.

A trap was laid by the local police force, setting up Detective John Jones as bait, but spies allowed Jones to be captured without concern. However, the Manhunter from Mars could not be contained, and invisibly blitzed the crime-corps during a brazen daytime robbery. Despite their weaponry, the crime army was no match for the Martian Manhunter, and was taken into custody.

Powers & Weapons:
The General displayed no exceptional physical attributes, and relied on a lieutenant for much of his work. The General commanded dozens of troops armed with the latest military weapons of their day. The criminal corps' arsenal included machine guns, grenades, smoke shells, flamethrowers, several tanks, and a fighter jet.

Quote: "We waged a good battle today, gentlemen, but we must strike again, swiftly, before enemy troops-- the police-- have a chance to counter-attack!"

Created by Jack Miller and Joe Certa
Posted by Diabolu Frank at 12:36 AM