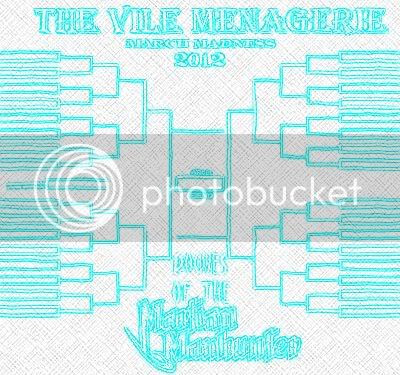 Despero stalked through the Silver Sauna, his three eyes observing the mounting casualties...

B'enn B'urnzz fought the law and crime won. "I'm the future of Mars, Marshal. I never even heard of you in the history books." Despite the impressive size of the genetically-engineered Martian, B'urnzz took the man and stripped him bare to make use of his protective armor in the brush. Trekking forward, he came upon a mound of unconscious Saturnians that had once formed Cabal. Cay'an stood defiantly to one side, and looked B'enn up and down in his ill-fitting gear. "J'Onn J'Onzz..." she snarled, readying to pounce...

The aluminum bush dripped with D'Kay as Thantos stood victorious. However, a great rumble had been heard in the distance, around the time the Cosmic Creature had trampled over Marlon's Beast. Its stampede continued, straight for the 3-In-1 Man...

The Martian Marauders' ambush successfully downed Vulkor's capsule craft, and his men fell under it like pins against a bowling ball. As the Marauders worked their way out of the sword patch and through the hull, the commotion attracted a troop of Lizard Men, fresh from barbecuing some Thythen with their flamethrowers...

Weapons Master had chosen wisely. His Jovian Flesh-Melter finished liquifying the Headman while cracked bits of Headmaster sparked on the ground. His body armor continuing to shield him from the fields of waist high machete stalks, Weapons Master caught a familar scent-- some sort of ape. He stepped over what appeared to be a meters long pale green serpent, not recognizing its Martian origins as the Master Gardener. From the trees above, Super-Gorilla Grodd wondered if this hunter had any psychic shields...

S'vor's momentary indecision cost him dearly, as he was struck from behind by Ryx's battered unconscious body, and both were flung into the deadly drink. The impact caught Scorch's attention as a similarly red-hued figure jogged toward her smiling. Wading into the silvery pools of melted metal, The Saturnian Criminal asked her, "Slide over here, and give me a moment. Your moves are so raw, and you look like one of my kind..."

Silver Sauna Round Two
Gorilla Grodd vs. Weapons Master
The Martian Marauders vs. The Lizard Men
Scorch vs. The Saturninan Criminal
B'enn B'urnzz vs. Cay'an
The Cosmic Creature vs. Thantos, the 3-In-1 Man
Posted by Diabolu Frank at 1:33 AM

I am enjoying these posts, and I love the INXS reference.